Hexagonal Architecture allows us to continuously evolve a web back-end. In this post, we’ll show you how we do that. It is a continuation of a series, previous instalments demonstrated how Hexagonal architecture facilitates automated test architecture, and development of a Vue.js based front-end. In this post, we will share how we applied it in the back-end for the Online Agile Fluency Diagnostic application.

Applying the Hexagonal Architecture pattern enables us to focus on the language of our domain in the components we develop. The pattern describes that domain logic resides in the centre, mapping to and from the outside world is managed through ports and adapters, and dependencies go outside-in. 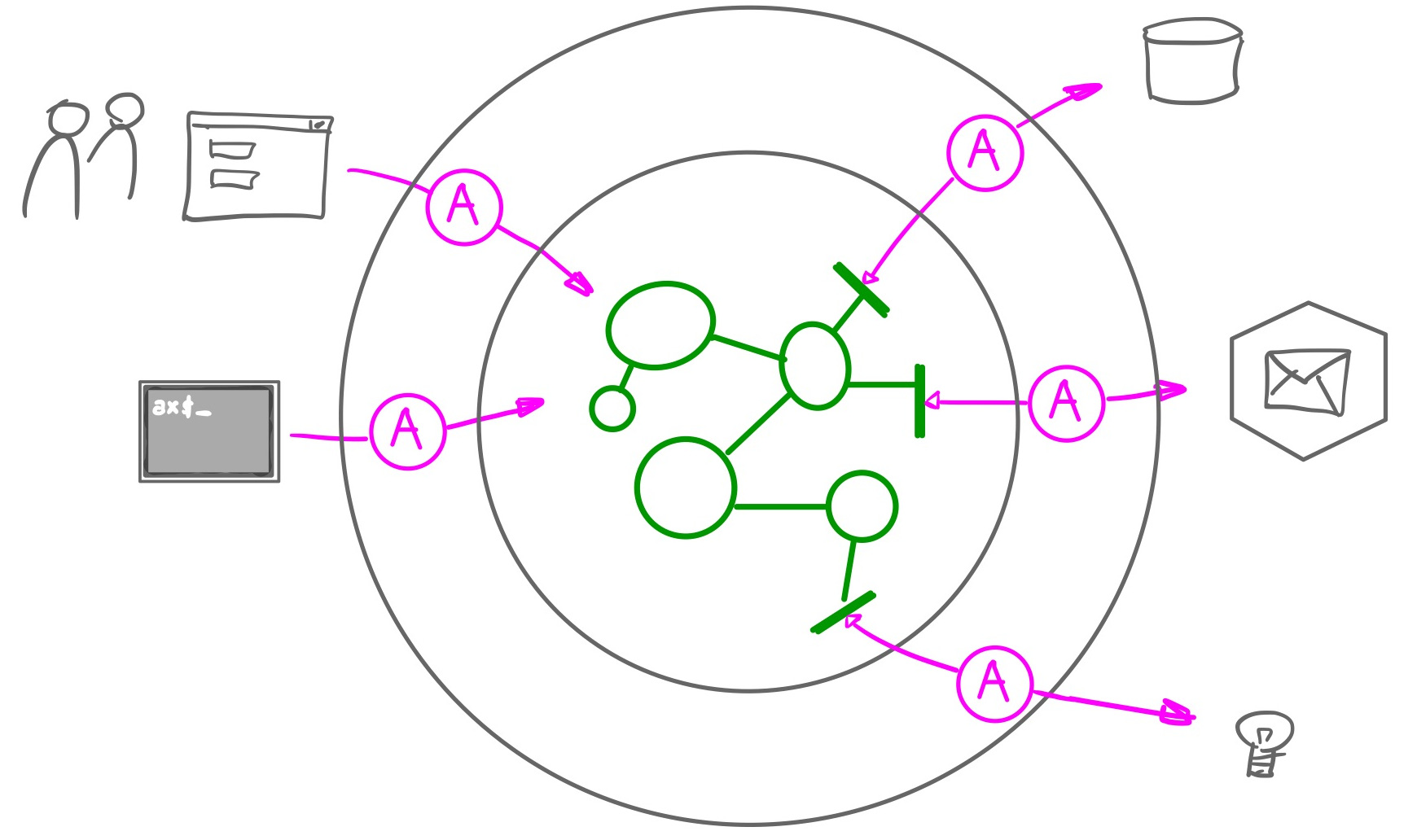 We prefer to work domain driven. We started out in spring 2020 with a quick event storming session and identified domain concepts like Facilitator, Diagnostic Session (the workshop), Survey, and Rollup Chart. We made sure that our front-end and back-end components speak this domain language, by having the components, classes and function reflect these concepts.

So how does Hexagonal Architecture manifest itself in our back-end component? What other design decisions did we make to structure our code? Let’s use creation of a new diagnostic session as an example.

The back-end component is Python based. It provides a HTTP REST API, stores its data in a SQLite database, and sends emails through SMTP. Relevant domain concepts are DiagnosticSession and the CreateDiagnosticSession command. The persistence concern is represented by a DiagnosticSessionRepository port, an interface within our domain.

The REST API is implemented by routing code based on the Flask library. This is a primary adapter driving the back-end component. We have create a DiagnosticSessionRoutes class that translates and delegates to domain objects.

The diagram below illustrates these different concepts. 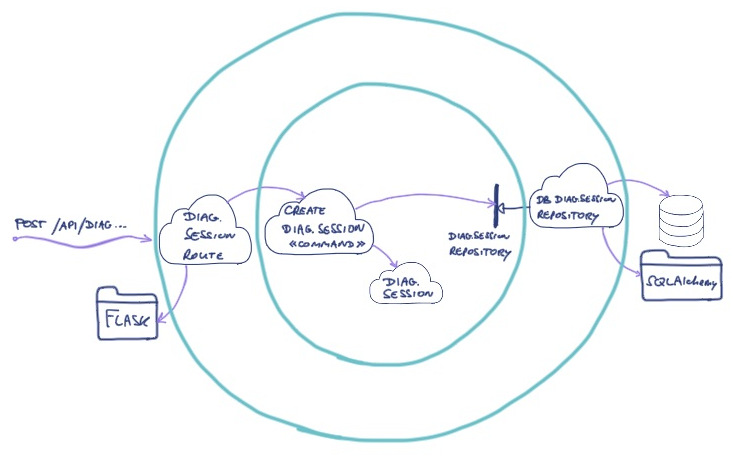 An overview of the different adapters in our back-end component:

We have structured our domain code in behaviour-rich domain objects and command & query objects. When a HTTP REST request comes in, the routing code transforms incoming JSON data into data objects and delegates to an appropriate Command or Query object within our domain.

The command and query objects are based on the Commands and Read Models we have found in our event storming session. In this way, our code speaks the same language as our domain model and we have traceability all the way. In our code for example, we have the CreateDiagnosticSession, JoinSession, and AnswerQuestion commands.

Commands and Read Models are patterns from Domain Driven Design. A Command represents a user’s intent to change something, a Read Model is the information a user needs to issue a command - what do you need to know to take that decision?

A Command object’s responsibility is to:

We keep commands mostly free of domain decisions. Domain logic should be as much as possible in the rich domain objects, like DiagnosticSession or Facilitator. A command just does a lookup, delegates, takes care of side effects. Most of the times conditional logic in a command is a smell.

A Command is an example of the Command design pattern. It is a function turned into an object, which facilitates injecting any dependencies needed for handling side-effects.

Let’s have a look at some code. To create a new diagnostic session, the front end does a POST on /api/diagnostic-sessions. The route code looks like this (with some details left out):

We have a static creation method withDiagnosticSessionsRepository that creates the route and instantiates commands based on injected repositories. In the tests, we use the constructor, because it enables us to inject a test double for commands.

RouteBuilder is a thin wrapper around Flask which helps us with for instance securing routes when necessary with login_required.

The POST on /api/diagnostic-sessions delegates to the instance of the CreateDiagnosticSession command. It extracts the fields of the JSON data into a Python dictionary, adds the currently logged in facilitator to this dictionary and passes this to the command as arguments. When successful, the command returns the id of the new session, which is put in the HTTP response. If the command is not successful, the body of its result will contain an error message, which is returned in the HTTP response.

To represent the command results, we have introduced a small Results library. We prefer to have success and failure explicitly in our code, rather than checking for None. None erases the reason for failure, which makes it difficult to deal with at the call-site. Result is available as part of our quiltz-domain library on GitHub.

We have introduced a register function that allows us to write focused adapter integration tests to cover the Flask integration:

We have hidden the Flask setup boilerplate in a RoutesTests base class. This also creates a test_client for doing HTTP calls. The setUp function makes sure all requests are performed as an authenticated user (self.do_signin()). It also provides a current_user_repository.

The createDiagnosticSessionRoutes function conveniently provides dummy None references for the different dependencies these routes need (in a quite Pythonic way), so that we can focus on the ones relevant for the specific tests.

We have decided to mock the CreateDiagnosticSession command. This bears the risk of having green tests even though the route and the actual command do not work together, especially with Python’s flexible duck typing. Therefore we have also created a suite of component end-to-end tests that test the full component wired with in-memory repositories.

The CreateDiagnosticSession command code looks like this, with some details left out for convenience:

We have implemented the command as a Python Callable, which allows us to call it as a function. The actual creation (domain logic) is delegated to DiagnosticSessionCreator, a factory. After successful creation, it stores the resulting event in a diagnostic session repository.

The command needs dependencies to do its job. We inject a diagnostic session repository via the constructor. We also inject an IDGenerator to generate unique ids based on UUIDs. Because generating UUIDs introduces randomness and an Operating System dependency, we have created our own thin abstraction around it: the ID and IDGenerator classes, which are also part of the quiltz-domain library. This allows us to test this command with a predictable fixed ID generator.

Because the command needs dependencies, we find it appropriate to apply the Command design pattern and turn it into class. An alternative is to use higher order functions and currying, but we prefer the explicitness of a class.

As we work test-driven, we have focused unit tests for the command:

We inject a fixed ID generator and a fixed clock - we control time, how cool is that? We use test data builders for both the fixed id and for the diagnostic session creation parameters, to reduce clutter and irrelevant details in the test.

The DiagnosticSessionCreator is responsible for validating and creating a valid diagnostic session:

The create_with_id function provides default values for incoming data, so that it can handle missing data. It validates the data using a small validation library that is part of the quiltz-domain library. Only if validation is successful, a DiagnosticSessionCreated event is instantiated, containing a new diagnostic session. If the data is not valid, a Failure object is returned by the validation functions.

The diagnostic sessions repository interface has just a few functions. We have expressed it using a Python abstract base class (ABC). It can save a diagnostic session event and it can provide a specific session by id or a list of all sessions:

This interface is part of our domain. It describes the role a diagnostic session repository plays. We have an in-memory implementation for tests, and a SQLAlchemy/SQLite based implementation DBDiagnosticSessionsRepository.

The DBDiagnosticSessionsRepository has its own adapter integration test, where we test the database mapping and the queries against an in-memory SQLite database. For each test case, a database is created and schema migrations are run so that the database schema corresponds to the current schema. This all runs in milliseconds.

Putting it all together, guided by tests

Looking back on how we have applied Hexagonal Architecture principles, we distinguish a number of rings, where the ‘domain’ consist of a ring of commands and queries and a core of rich domain objects. 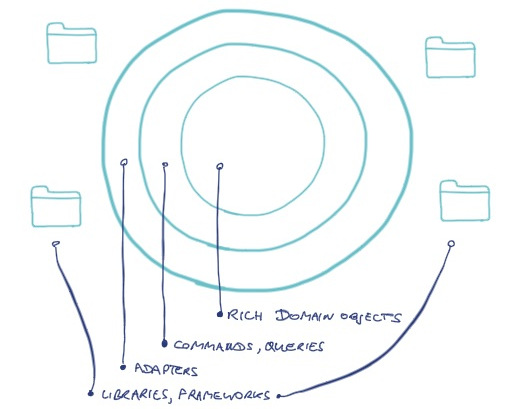 The Hexagonal Architecture pattern provides a lens to look at our automated tests. Our domain objects and commands have unit tests with limited scope (indicated by the green lines): 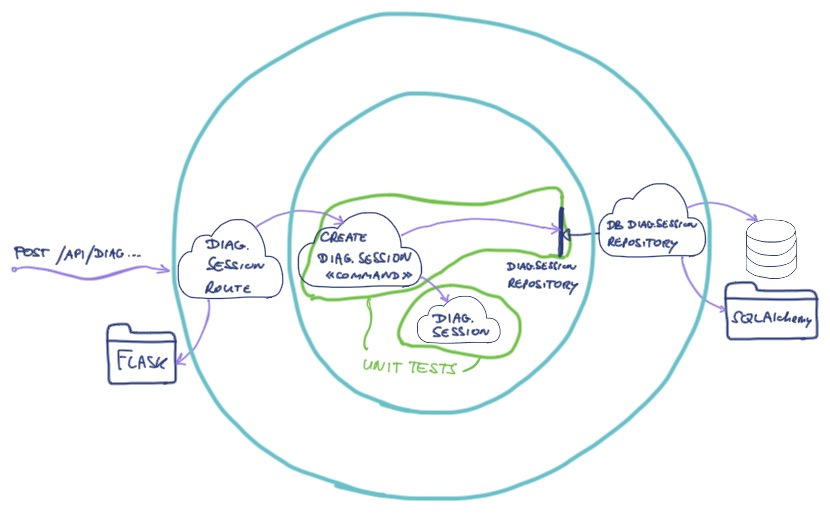 We have created a primary adapter for the HTTP routes and a secondary adapter for the SQLAlchemy/SQLite based diagnostic session repository. They have their own adapter integration tests that test how our code integrates with the different libraries: 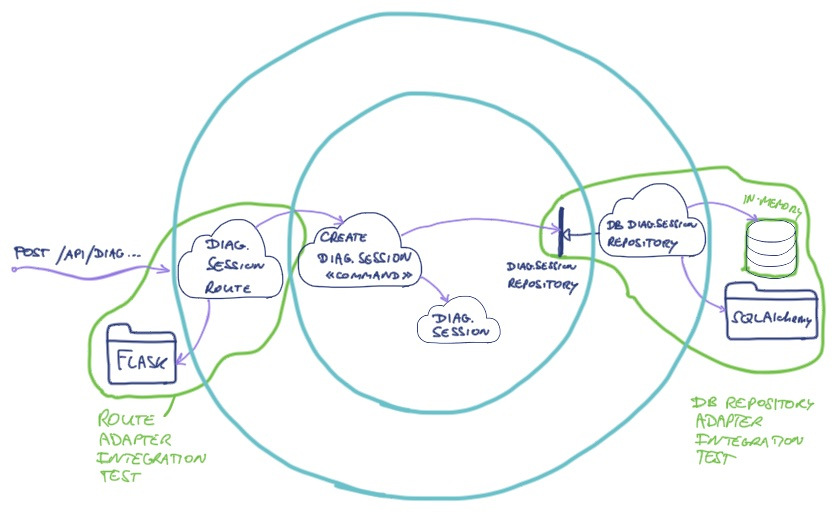 We also have a suite of component end-to-end tests, which test the whole back-end component through its REST API. This end-to-end test plugs in in-memory repository adapters to improve speed and reliability. We don’t need to run the end-to-end test against a real database, because our adapter integration tests cover that concern extensively. 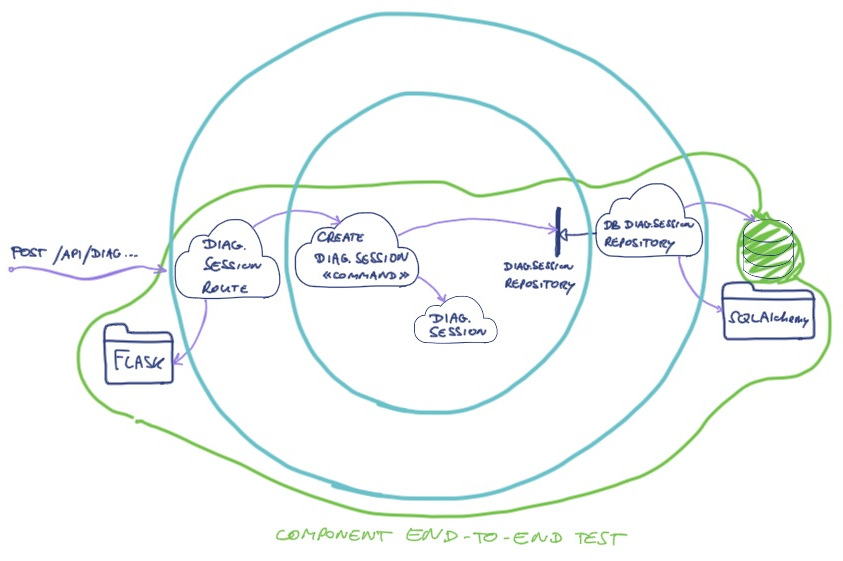 The component end-to-end test run fast enough to include in the back-end automated test suite. The whole suite of over 560 tests runs in under 10 seconds, giving us rapid feedback on every line we change.

In this post, we have shown how we have applied the Hexagonal Architecture pattern and how it helped us to let different concerns find their place in the code. It helps to decide What To Put Where. It also helped us in creating a fast and focused test suite that gives rapid feedback when developing.

Hexagonal Architecture fits well with Domain Driven Design. It facilitates using domain language in the core of your components.

This post is part of a series on Hexagonal Architecture:

Seeing your systems through a Hexagonal lens

Making informed architecture decisions across your application landscape is a tough skill. We can support you with for instance architecture reviews, carrying out experiments and facilitating collaborative architecture sessions.