In a previous post, we elaborated on why and how we apply Hexagonal Architecture in front end applications.

We have also written about how hexagonal architecture informs test architecture. We apply this thinking for a front end component as well: as we distinguish ports, adapters and domain logic, we will have unit tests, adapter integration tests, and possibly some component end-to-end tests.

In this post we will dive a bit deeper in the how and why using an example taken from the Agile Fluency Diagnostic application we are developing.

The Agile Fluency® Model describes an agile team’s pathway in a positive, inclusive way, promoting improvement. If you haven’t already, checking out the Agile Fluency Model may well be worth your while. Or drop us a line if you’d like to learn more. 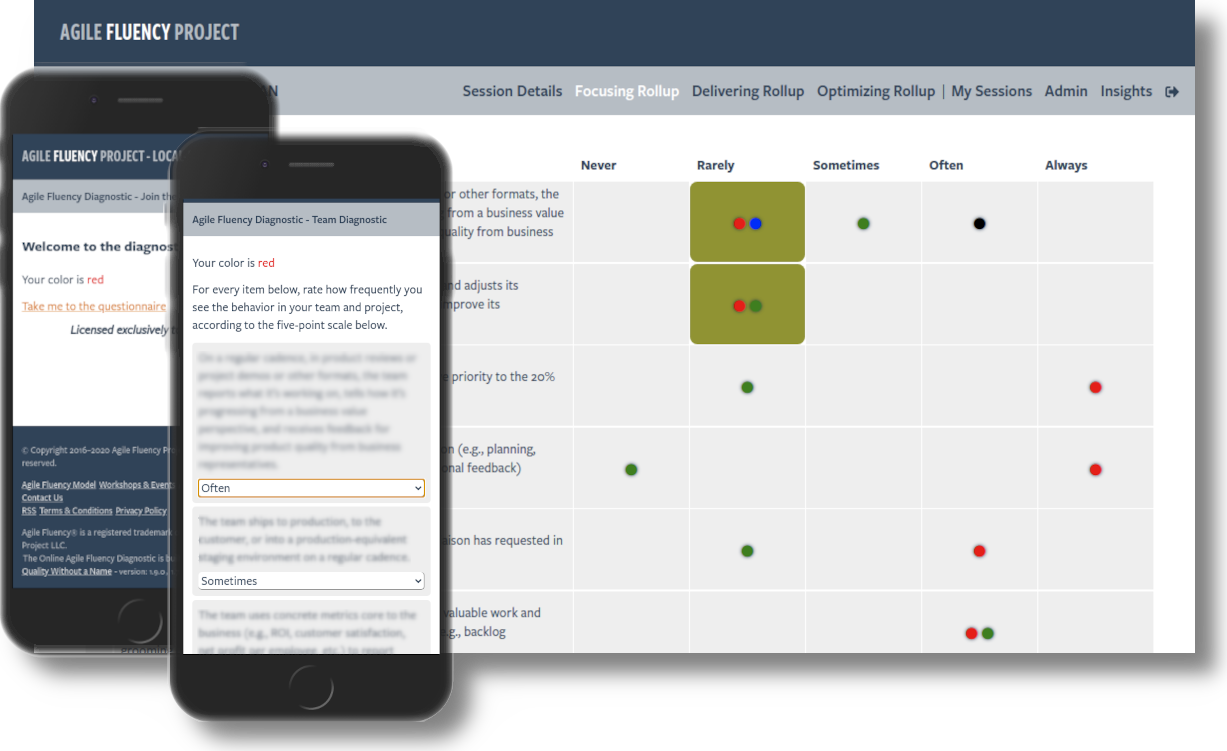 We will use a specific activity as an example: creating a new diagnostic session. We will explain what decisions we made for primary and secondary ports and adapters, and for the domain code. Here is a quick architecture sketch, to show the different objects involved and how they relate to the hexagon: 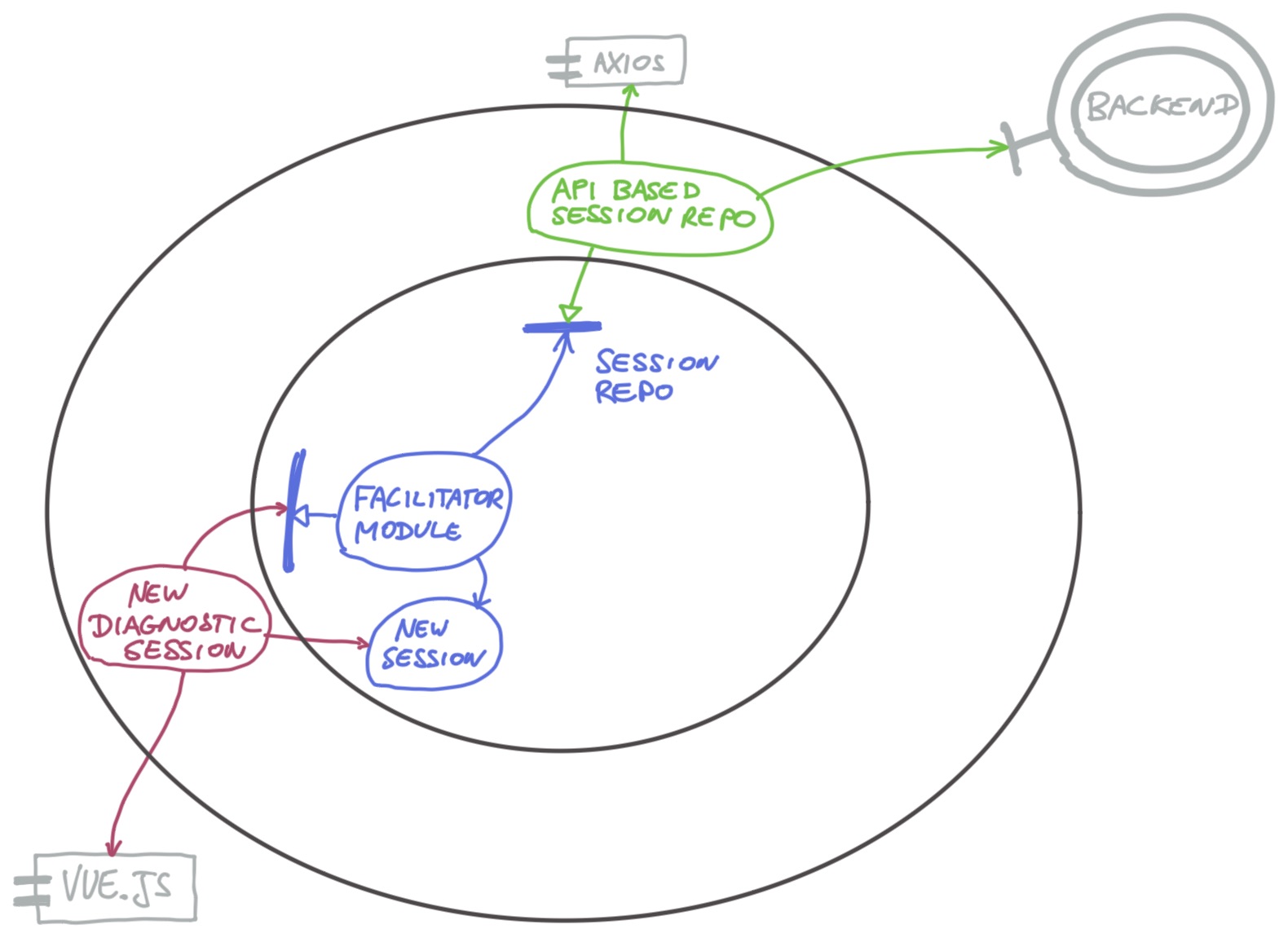 The UI components are the primary adapters, drawn in red; domain objects with view logic are in blue; the API adapters are the secondary adapters, in green.

On quite a few projects, we have seen developers putting such validation logic in front-end components - Vue.js components in our case. Although Vue.js components lend themselves better for fast tests than for example Angular components, testing front-end components can still be a pain, especially when their logic becomes more complicated. The clutter in the tests having to do with setting up front end wrappers and possibly spying on services often obfuscates what the tests are really about: validation and other logic. The option to add logic to strings within the html template often makes things worse.

This is what the NewDiagnosticSession Vue component looks like:

The code looks roughly like the code block below, leaving out some details for clarity. Take a look and pay attention to not only how we implement form submission, but also how inputs are validated.

The TextInput is a small component we created to wrap an input with a label in a div.

Since the NewSession object is being observed by the component, missing fields and the like are highlighted in the UI. We use a conditional class on the TextInputs for this: 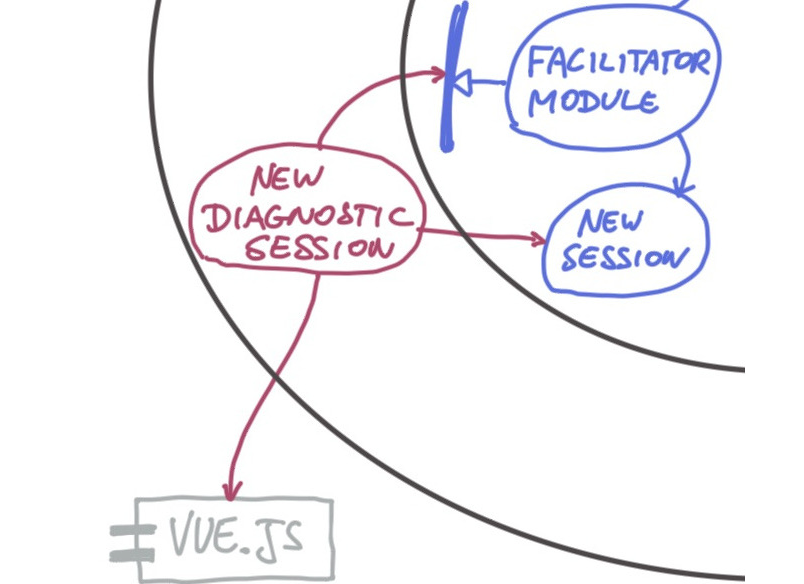 UI component as a primary adapter:

The component receives a facilitatorModule object as a property. This is our ‘state object’. We have decided to inject this dependency through props, because we don’t like singletons or global variables for managing our dependencies, nor do we like dependency injection magic. We want to be in control of our dependencies. To activate Vue change detection on the state within this object, we need to include it in the data part - hence the facilitator: this.facilitatorModule.

Some rules of thumb

Some of our rules of thumb for UI components as primary adapters are:

These rules of thumb help us to keep our components clean and focused. As a result, the automated tests for this component are equally clean and focused. Their focus is the component showing the correct data and elements, and delegating to appropriate domain functions. A selection of the NewDiagnosticSession tests are shown below.

We have started writing a small DSL (domain specific language) around the Vue test utils, to reduce testing boilerplate: aVueWrapperFor(NewDiagnosticSession).withProps ...

Let’s have a closer look at the domain code. First, the FacilitatorModule. The suffix ‘module’ is chosen to fit in the Vue ecosystem. This module manages state relevant for UI components. It acts like a Facade and exposes only relevant state and actions from the domain to a UI component. If we were to use TypeScript, we would have made this explicit with an interface.

The FacilitatorModule manages the currentSession state on behalf of another component. Why did we put it in this module instead of a separate module? We will dive into this in a future blog post.

The session repository is injected via the constructor. The dependencies are wired in main.js.

We started out with Vuex for state management. Vuex is highly opinionated on structuring state management. This is helpful to some extent, as it guides developers in structuring code in state, state mutations, and asynchronous actions. The use of Vuex modules in UI components is however cumbersome and verbose. We also found the Vuex structure too restrictive for how we want to distribute responsibilities over separate domain objects.

Inspired by Vuex and our own experience with structuring domain code, we decided to roll our own. We follow these guidelines:

We are still unconvinced about the name ‘module’, which we borrowed from Vuex. Your suggestions for a better name are welcome.

A UI component with a form usually maintains state. This starts straightforward, just one or two strings, but along the way more complexity creeps in. When we were building the NewDiagnosticSession component, we saw that we had a clump of data and some validation logic related to it. Later on, we found more logic: when a session is marked as test, the number of participants will be fixed to three, because three is the magic number ;-)

Data and corresponding logic wants to be together, so we extracted it into its own class NewSession:

NewSession is a stateful object: it holds a new session. After you validate it, it will also contain information about its validity in the errors property.

Its unit tests reflect the focus of NewSession. A selection of its tests:

We often use the Builder pattern for creating objects in test code. Builder separates the construction of a complex object from its representation. These builders then have the form of

Why did we introduce this instead of just calling the object’s constructor? Often we just need an valid instance of something and we do not care about the specifics, sometimes we want to control only one specific field. Repeating constructor calls is tedious and creates unnecessary coupling in tests.

In our JavaScript code the original Builder Pattern has less added value, because functions with default parameters can do the job just fine. The aValidNewSession function is an instance of such a function. It provides an example NewSession with valid data. It lets us describe variations succinctly like above, for instance: aValidNewSession({ participants: '31' }).

By moving view logic to a compact, dedicated, plain JavaScript object, we can isolate UI related behaviour and write fast, focused tests for it. Testing validation and feedback rules through the UI would be cumbersome. 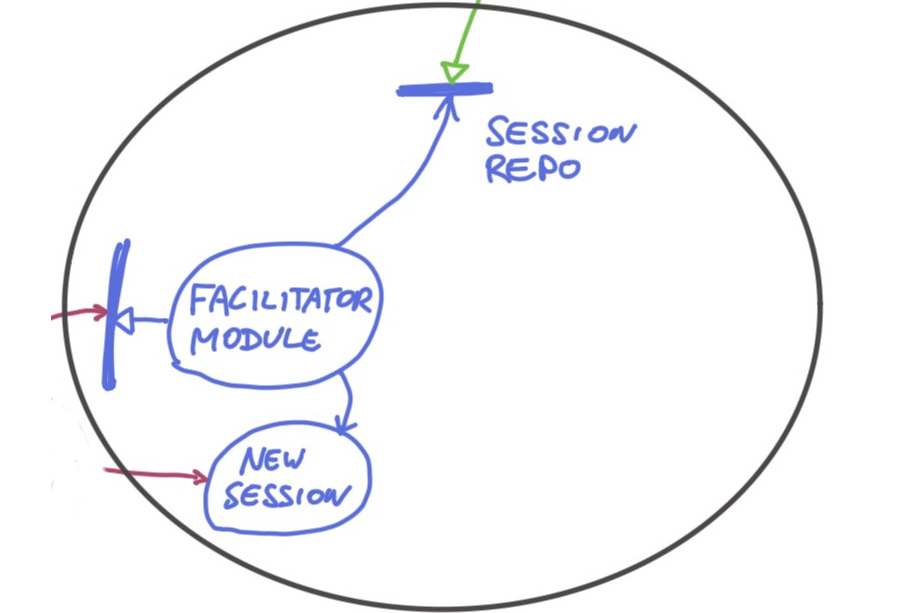 Let’s have a look at the API adapter: the ApiBasedSessionRepository. We follow the Repository Pattern: the adapter exposes a domain oriented interface, in this case consisting of the all and create functions. In Typescript we would define a SessionRepository interface having these two functions, so that our domain code depends on this abstraction and not on API implementation details or http library peculiarities.

We use the axios library for performing API calls.

This session repository offers the create and the all functions to the domain.

Here is an excerpt of its adapter integration test:

Adapter integration tests are valuable, because they force us to understand the service we are adapting, and help us pinpoint problems if there ever are any.

The first responsibility of an API adapter is to encapsulate communicating with (back end) APIs (line 35).

The API adapter also takes care of mapping data to/from domain objects. We do this mapping explicitly, to decouple our front end code from API details. This limits the impact of back end API changes and allows our UI component to have its own view on the domain - which might differ from the way back end data is structured. We prefer to put API-domain object mappings in separate functions in the adapter, to make the code easier to read and to be able to write focused tests for the mapping (line 21).

A third responsibility of API adapters is handling errors. They convert API errors to something meaningful within the UI component (line 50). In our application, we map error on sensible messages. Sometimes we can convert an error into a Null object, for example by returning an empty list if data retrieval fails. 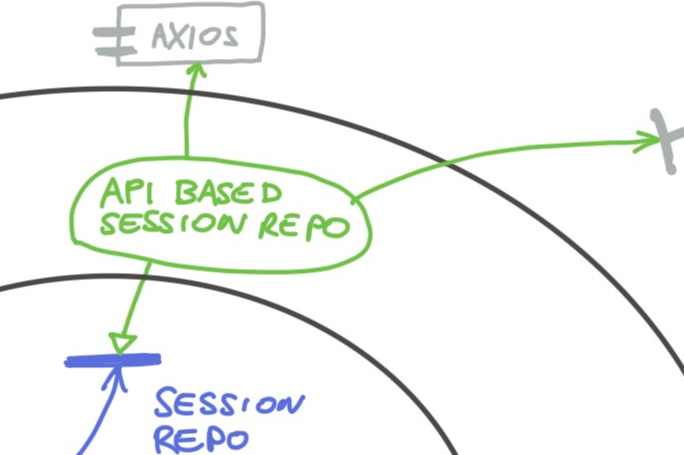 We have walked you through an example of how we have applied the Hexagonal Architecture pattern to a Vue.js based front end application. We focused on a particular user need, create a diagnostic session. We have shown example code of primary adapters (the UI components), domain code (state & view logic using plain old JavaScript objects), and secondary adapters (code that calls APIs and maps data).

We do not pose this as a best practice. Instead, we made a series of considerations, trade-offs and design decisions informed by our experience with front end code and hexagonal architecture, and guided by different concerns we ran into when developing our application. Our journey is probably more valuable to you than the specific code that came from it.

In a follow-up post, we will elaborate how we structure the domain code. This is especially relevant when your front end component grows and you are looking for ways to reduce complexity.

Credits: many thanks to Willem for editing and helping improve this post.

Seeing your systems through a Hexagonal lens

Making informed architecture decisions across your application landscape is a tough skill. We can support you with for instance architecture reviews, carrying out experiments and facilitating collaborative architecture sessions.