In this post, we will share another benefit of looking through the Hexagonal Architecture lens: it supports making decisions about the architecture of automated tests in your application landscape. It can guide you in questions like:

Say we have an application that consists of a backend component using a database, and a frontend component running in a web browser. The backend exposes an API, which is represented by the perpendicular line between frontend and backend in the picture below. 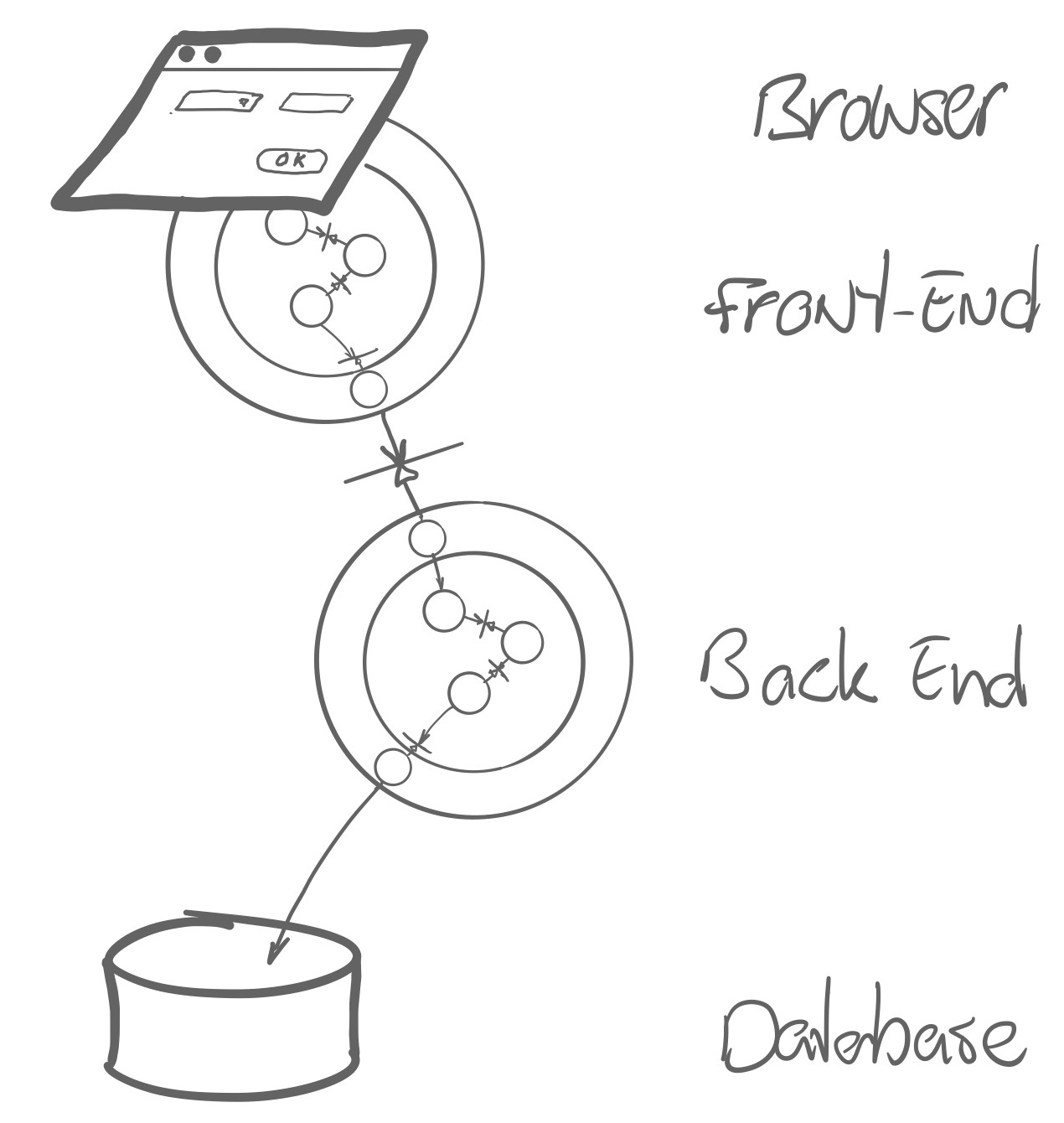 We see both the frontend and the backend as hexagons, each with its own domain, its own ports and its own adapters. The business logic and view logic is in the center, dependencies go outside-in.

Looking at our application landscape in this way, we can define different types of tests having different scopes:

The term unit test is often used for any automated test written by a developer, but we prefer to stay close to its actual meaning: an automated test for a unit, i.e. one object or function, or a small cluster of objects.

We write Unit Tests for the domain logic inside the hexagons. Because the domain does not depend on outside stuff, we can test it in isolation and write clear tests that speak the domain language.

Unit tests for a component have a limited scope and run fast, in milliseconds. A whole suite should run in mere seconds. 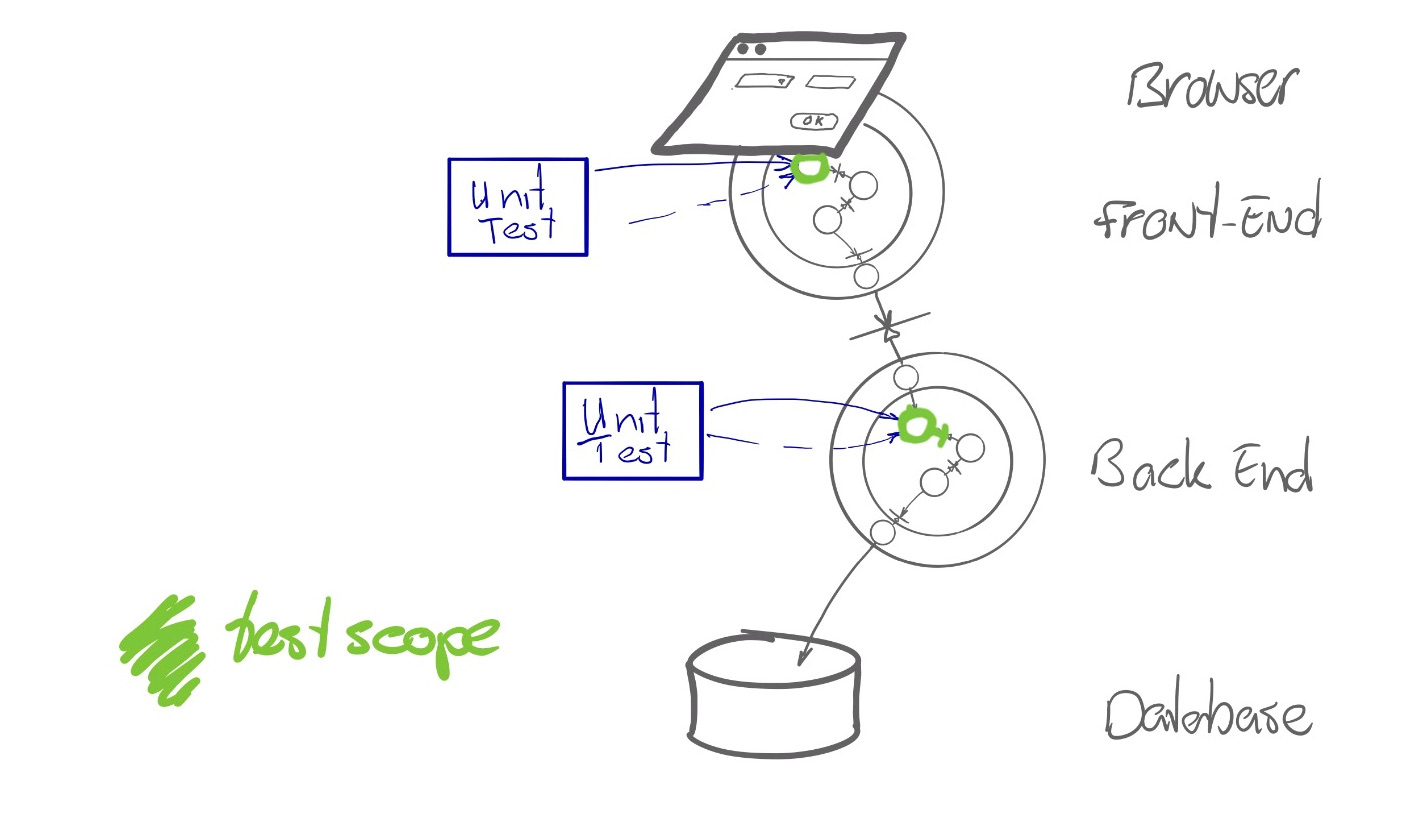 By decoupling adapters from the domain, we can write focused automated tests for adapter concerns. In the Growing Object Oriented Software Guided by Tests book, these tests are called Integration Tests. We prefer Adapter Integration Tests or Integration Point Tests, to express the intent a bit better.

Adapter Integration Tests verify whether an adapter integrates properly with a database, an external API, etc. The test exercises the adapter mainly through its domain interface. 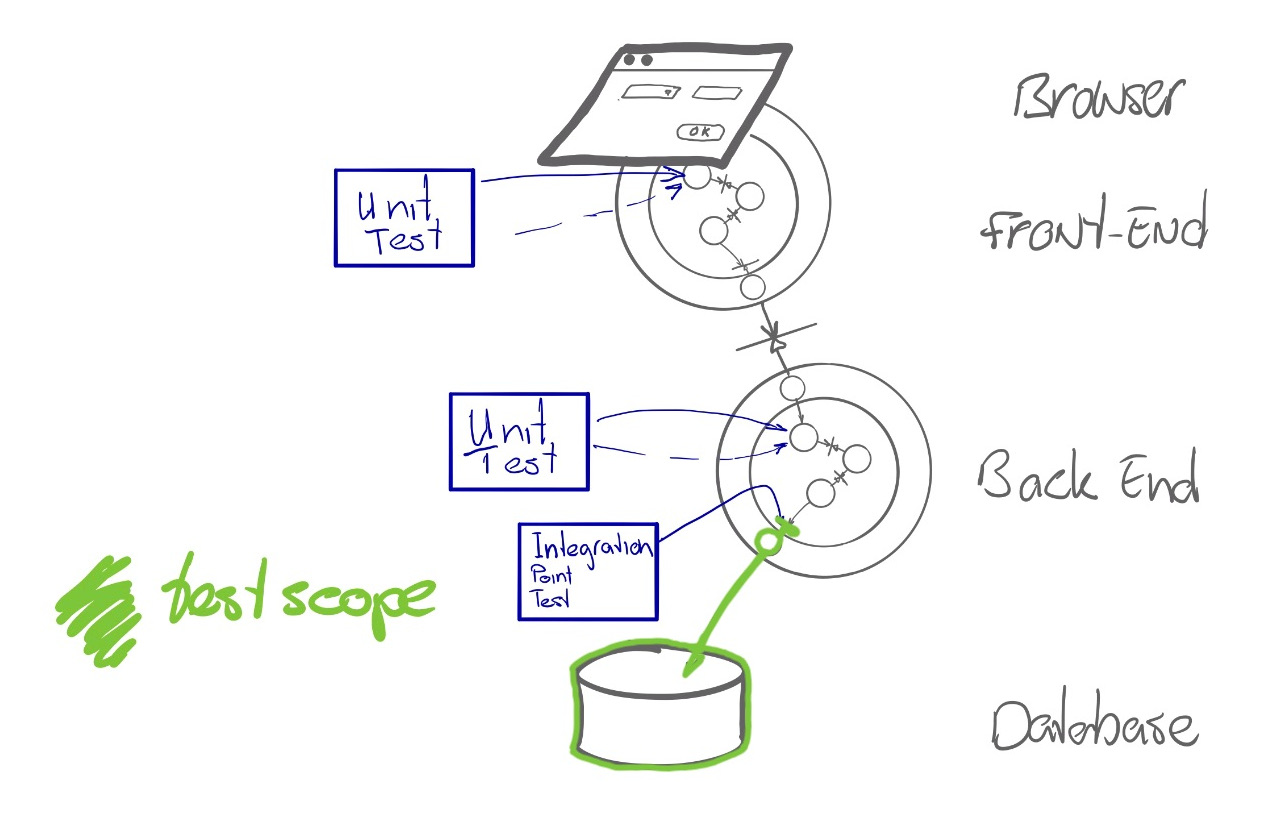 In the backend component of the Agile Fluency® Diagnostic application we’re working on, we have a Facilitator Repository that stores data about facilitators in an SQLite database. It provides a domain oriented interface with functions like save and all, to save a facilitator and to retrieve all facilitators. It looks like this in Python:

This adapter integrates with the database library and takes care of mapping domain objects to and from database records.

We can choose how much of the integration we want to cover in the test: our TestDbFacilitatorRepository test could also use a real database running on our local machine and in the build environment, to make the difference with the production situation even smaller.

For sending emails, we have written an adapter integration test that checks our SMTPBasedMessageEngine with a fake SMTP server that we start and stop from the test. Alternatively, we could test with a real SMTP server and poll a test mailbox for messages. Although closer to the actual production situation, this approach is slower and more brittle - again a trade-off.

Testing your front end application with different browsers is another example of adapter integration tests. The intent of these tests is to verify if the UI behaves correctly in different browsers. We do not want to use full-system end-to-end system tests for this, we just want to have the front end component running e.g. against stubbed backend APIs.

We can define tests around the contracts between the producers and consumers of an API. Recently, contract tests have been given a boost by Pact. Pact offers a specific way of contract testing: Consumer based contract testing.

For consumer based contract testing, all consumers of an API publish examples of how they use that API. The contract testchecks the examples against the producer implementing the API. In this way, you get quick and specific feedback if all known consumers can still work with the changes in the API. 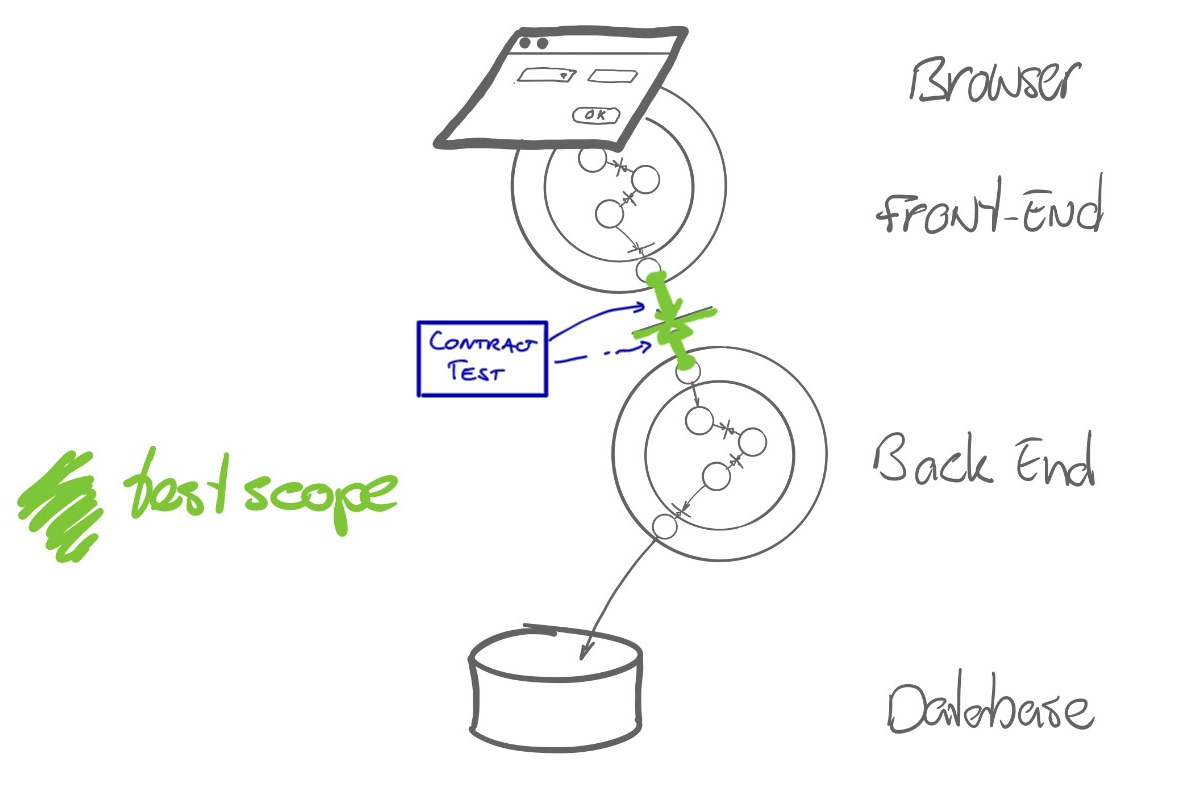 Versioned schemas for API contracts are an alternative solution. Schemas make evolution of APIs a bit of a hassle (sometimes that’s a good thing, especially with public APIs). Contract testing is more flexible and supports smoother evolution, as for every API change, it checks all consumers. 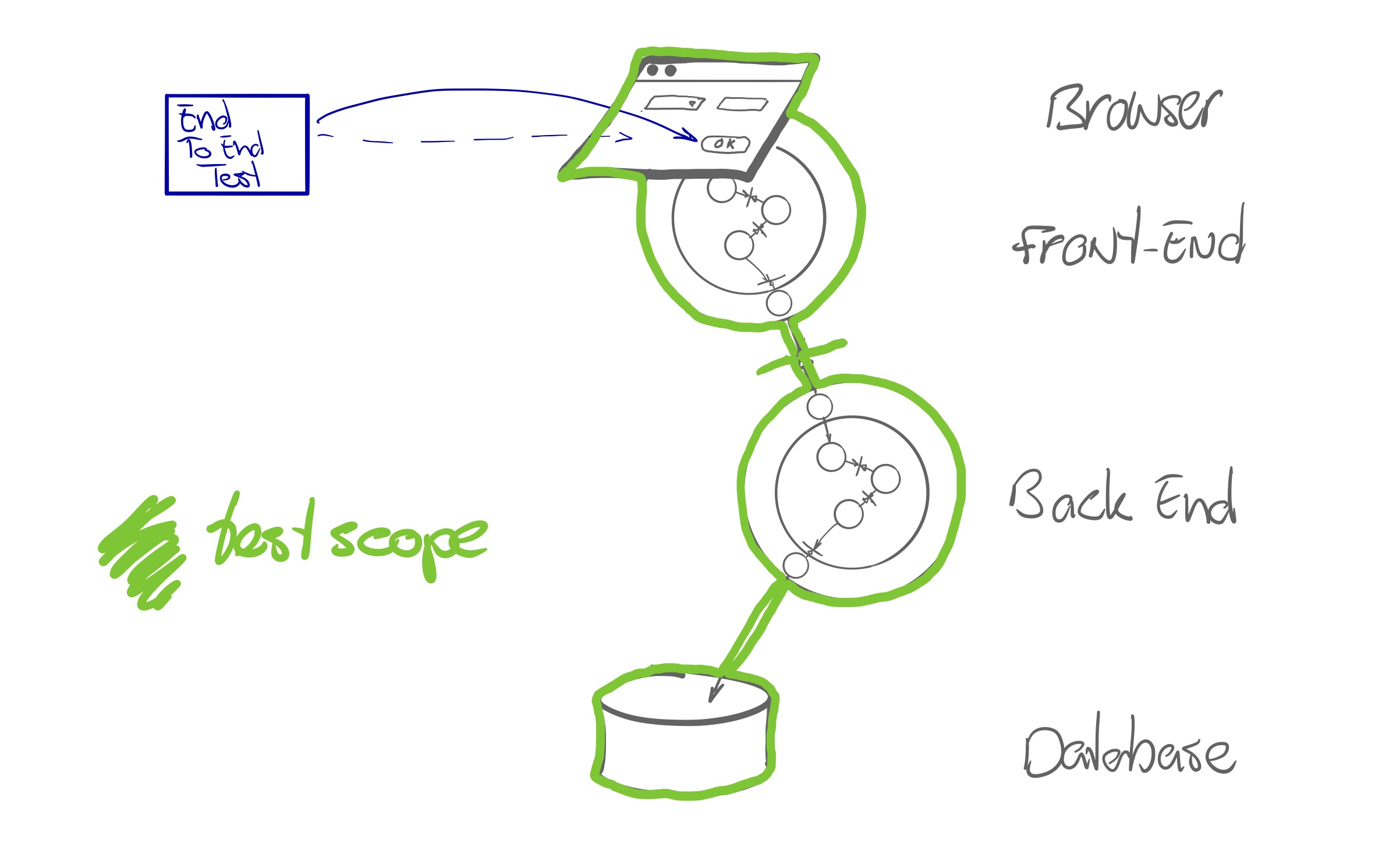 There’s much to discuss about end to end tests. See for instance Integration Tests Are A Scam by J.B. Rainsberger. They come at a huge price. Relying on them for your confidence that your code works correctly is not very effective for the reasons mentioned above.

For example, we can create an end-to-end test that uses the API of a component and exercises the component with its database and possibly some other (real) components. Testing though an API is simpler and less fragile than testing through a UI. 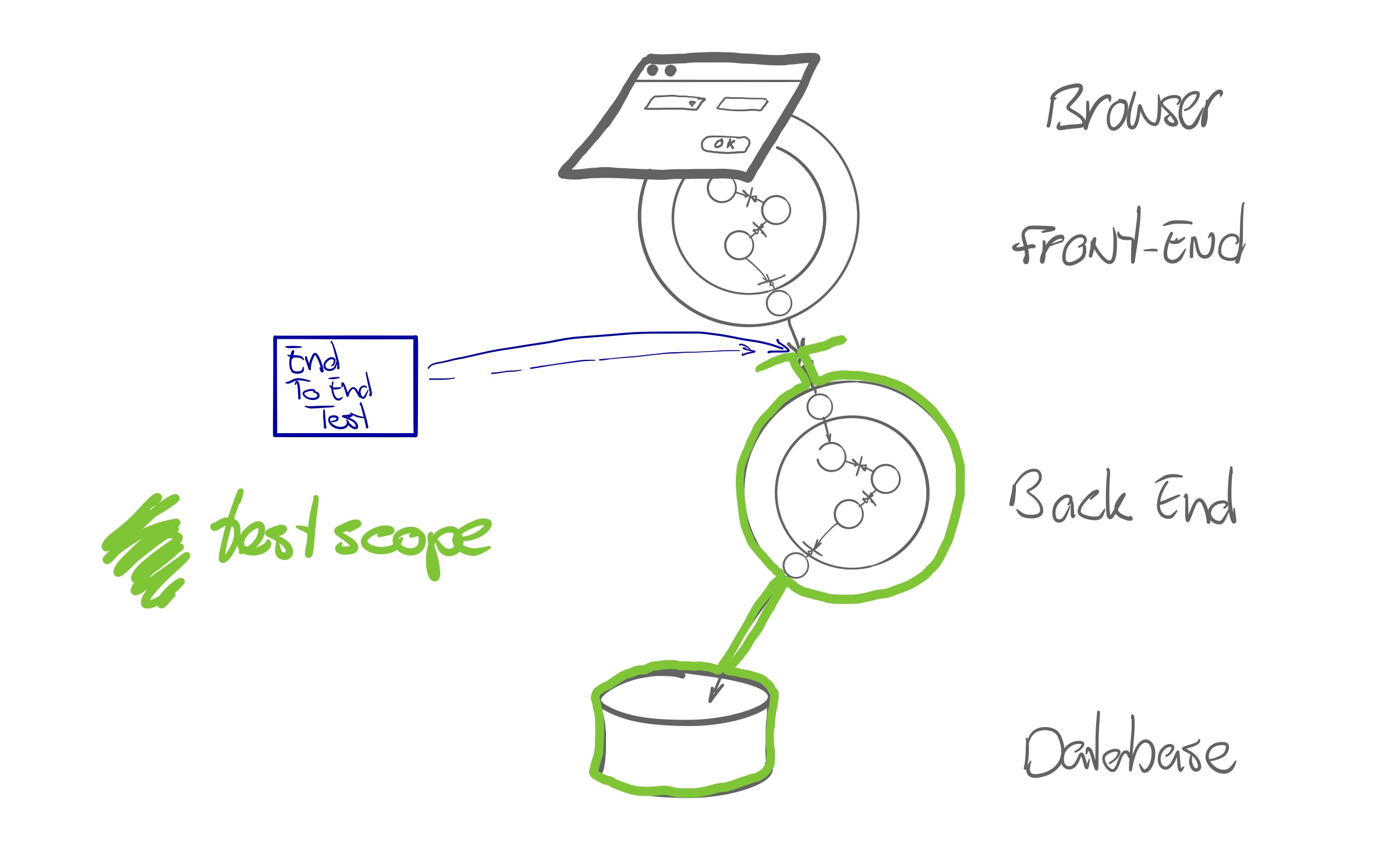 We can test end-to-end with a fake database, instead of a real database. This speeds up the test and avoids state that needs to be cleaned up. 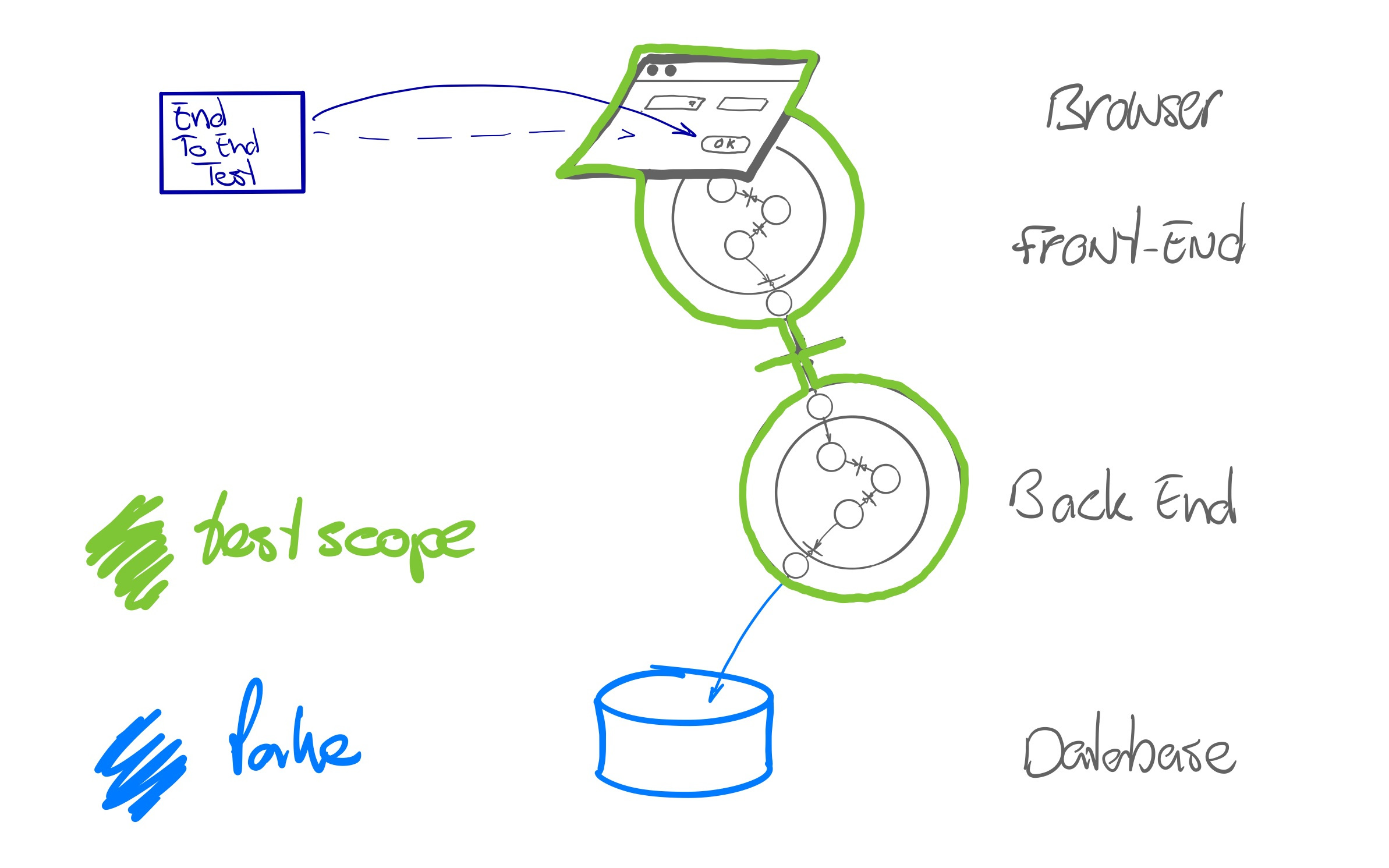 Fake databases can still be slow. If we cover database integration with Adapter Integration Tests, we can opt for wiring the component with a fake repository implementation. 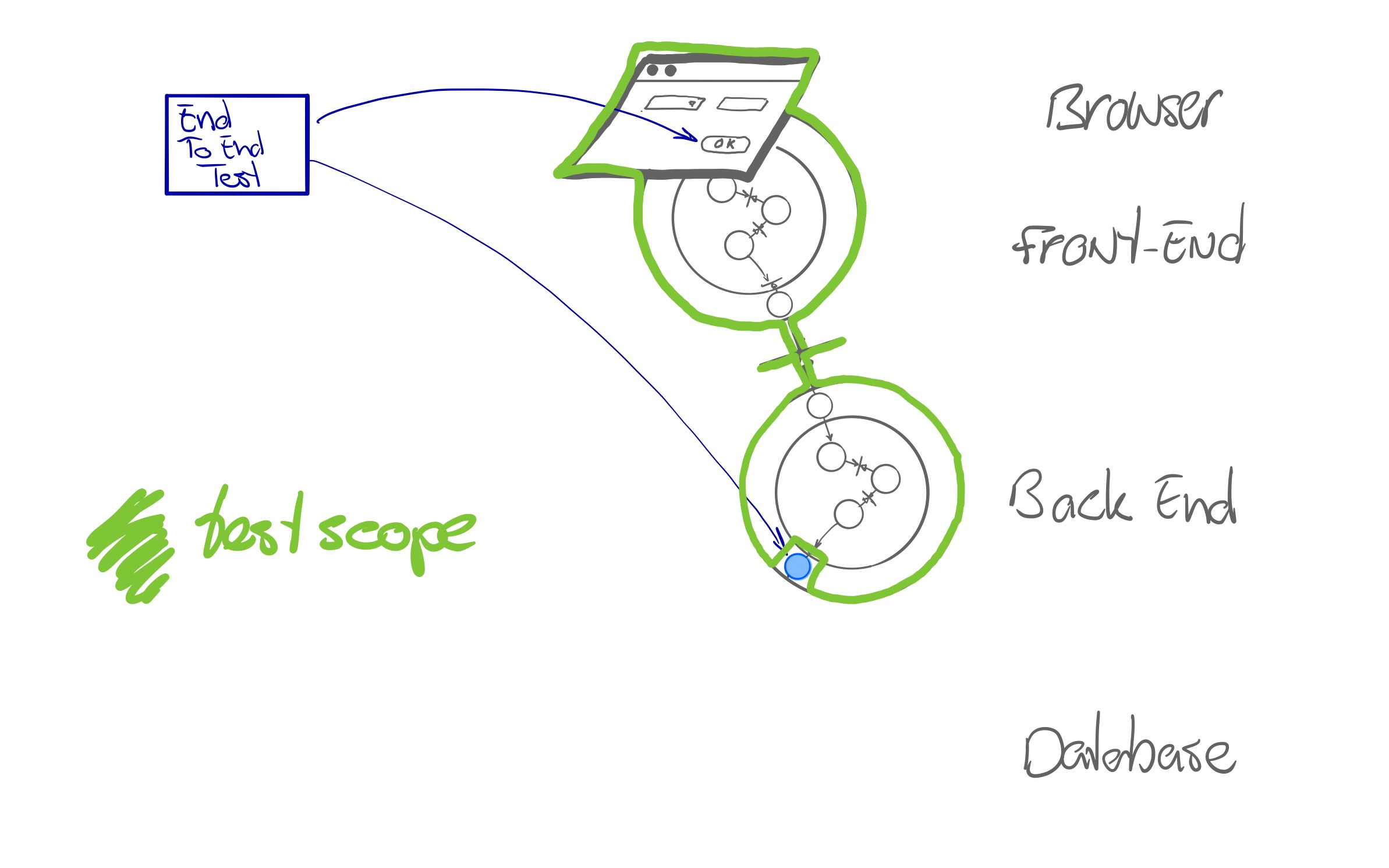 We can test the backend component end to end via its API, with fake repositories. This option provides quite an effective balance between speed and end to end concerns. In one specific project we used this, as the emerging complexity of one component’s behaviour asked for more than just unit tests. Wiring the component like the picture below allowed us to run interesting scenarios at the speed of unit tests. The feedback from failures in these tests was suboptimal however, so for each failure, we discussed what unit tests were lacking. 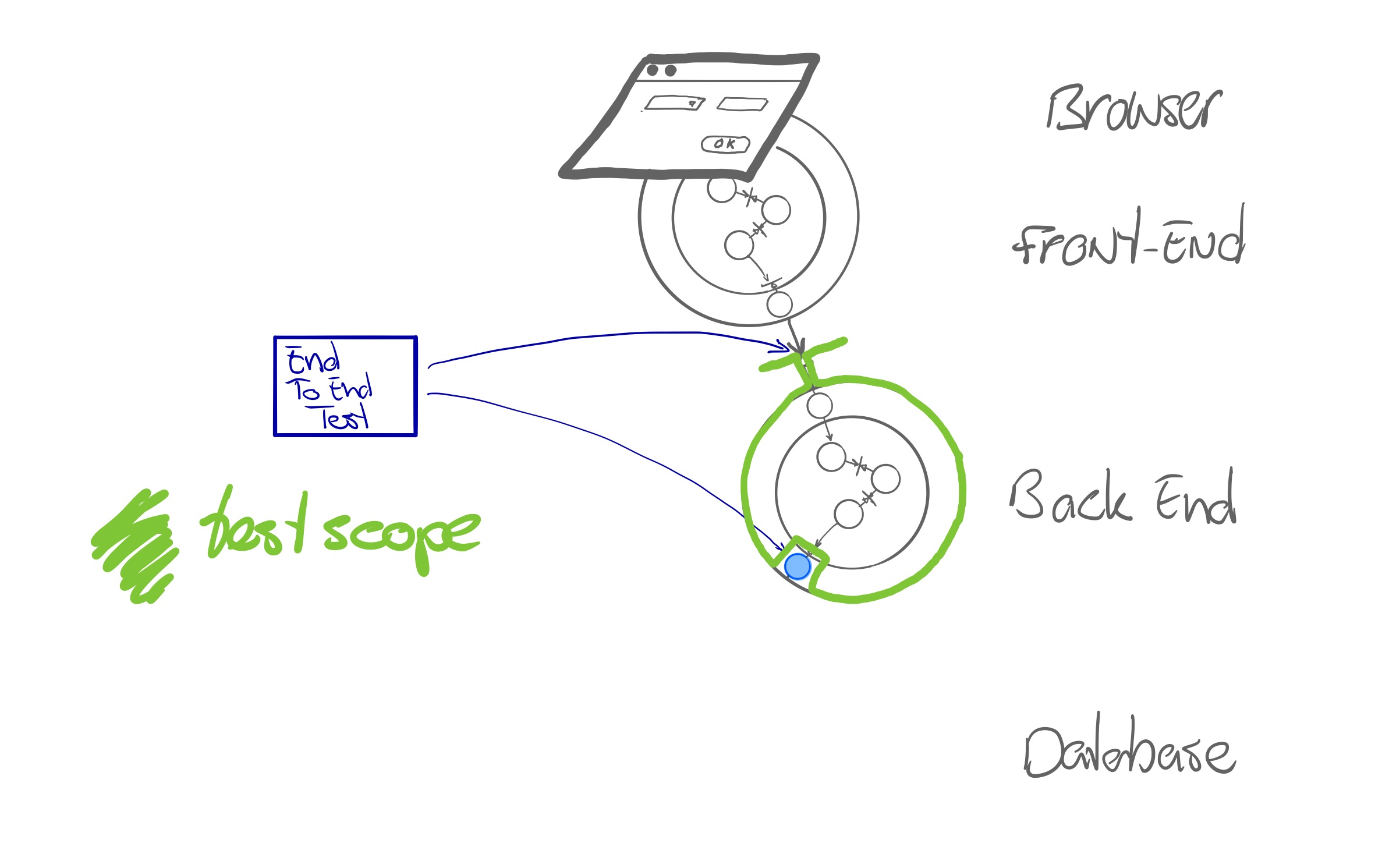 There are many ways of creating end to end tests, with different trade-offs. A few years ago, Nat Pryce for example did a thought provoking presentation about end to end functional tests that can run in milliseconds.

Looking at your application landscape and your services through the Hexagonal lens provides you with useful options on how to design and structure different automated tests. It moves away from ideological debates and focuses on getting useful, fast feedback with reasonable investment.

There is no single right way or best practice for your test architecture, but we do have preferences:

We let us guide by the feedback loops in our development process. We always look for ways to get better feedback faster.

Getting a good mix of automated tests and making appropriate trade-offs can be a challenge. We can support you, with workshops, advice or architecture and code reviews.