Deciding What To Put Where is half of the work of software development. What should I put where, in such a way that me and my colleagues will be able to find it back later? Finding a good place for things in code greatly helps or hinders maintainability of the code later on.

Knowing what to put where is a skill developed through practice. Things that can be helpful are looking at code through a Hexagonal Architecture lens, making ‘things’ in your code explicit through types or classes, designing with CRC cards, pair programming, and documentation. 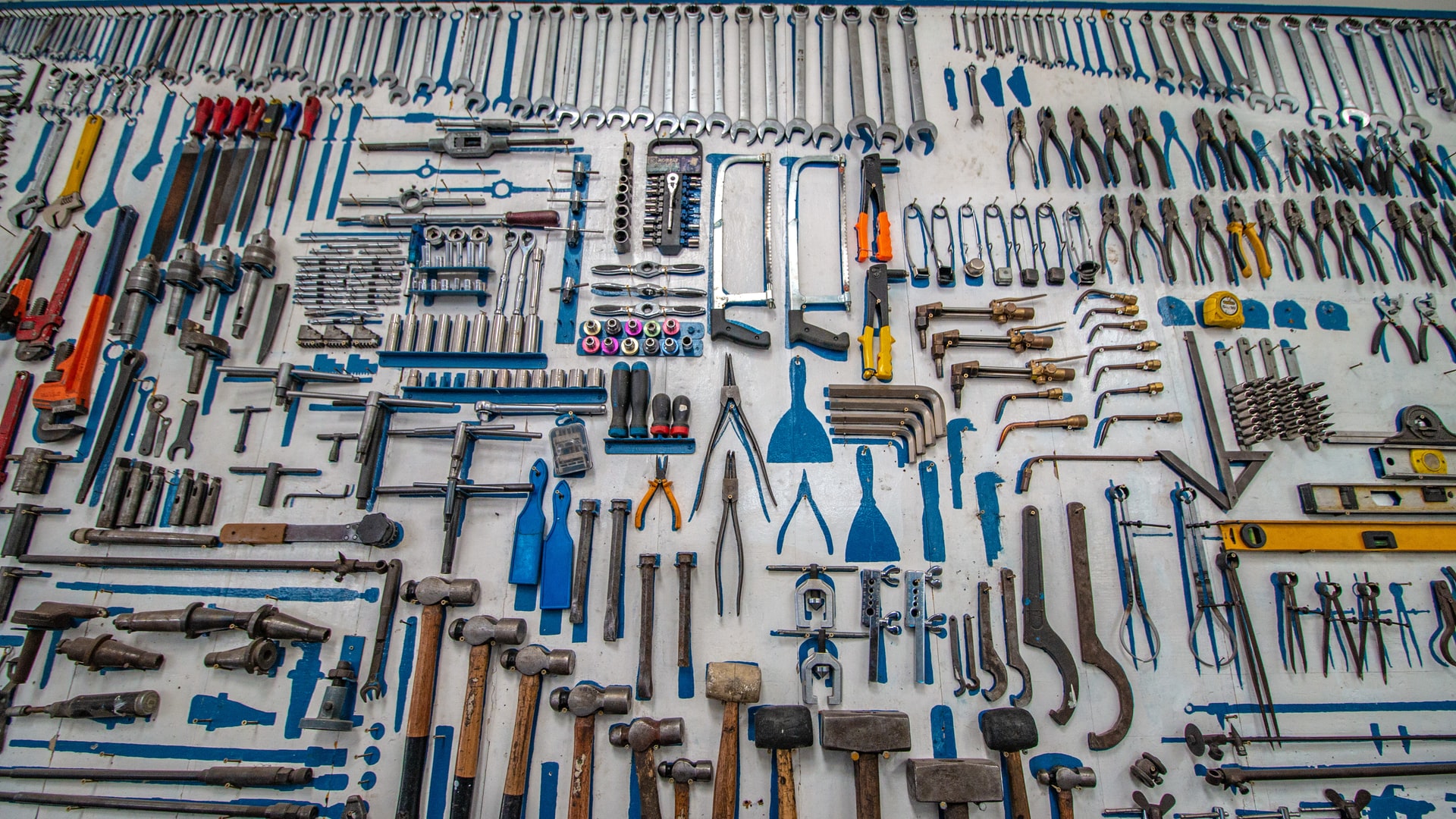 Knowing What To Put Where

An important part of our job as software developers is taking design decisions at all levels: sketching a high level architecture on a whiteboard, where we decide which responsibility goes where; CRC (Class Responsibility Collaborators) design sessions, where we play out scenarios of object interactions, to see which object will have which responsibility; and at the micro-level, like deciding on names for specific operations.

We are not only trying to make the software work for now, we intend to develop in a sustainable way. Therefore we are continuously thinking “what concern should we put where?” We spend much more time navigating, reading and understanding code than writing it. Whenever we need to make changes, we’d like to find out quickly where we should be, and we hope that the concern to be changed is in one and only one place.

Putting things in the right place will help us later on. It is so important that we think it deserves its own acronym: WTPW - What To Put Where
We can put “stuff” just anywhere, but then we will spend many hours looking through the mess. It’s like keeping your shed organized. You can just dump your tools anywhere and figure out how to find the things you need in the future. That saves time now, but is frustrating when you need ‘that thing’. Putting some consideration in what you are going to put where will save you lots of time and frustration later.

How do we decide What To Put Where? We do not have generic rules or best practices, but we do apply numerous design heuristics. It is a skill you learn through (deliberate) practice. So let’s have a look at two examples, to share our considerations about what should be put where. The examples are from our work on the online Agile Fluency® Diagnostic application.

In the Online Agile Fluency Diagnostic application, we show a colourful aggregated view of team survey results (the ‘rollup chart’). We decided to make the aggregated data available for download in CSV format (Comma Separated Values), so that our users can process it with their own tools.

In our back-end component, we already had the following:

Where do we put a CSV export? We regard it as another view on the Rollup domain object. Looking through the Hexagonal Architecture lens, it does not affect the domain logic, so we do not need any changes there. It is an adapter concern: it is about translating a domain object to a different format on a different endpoint. 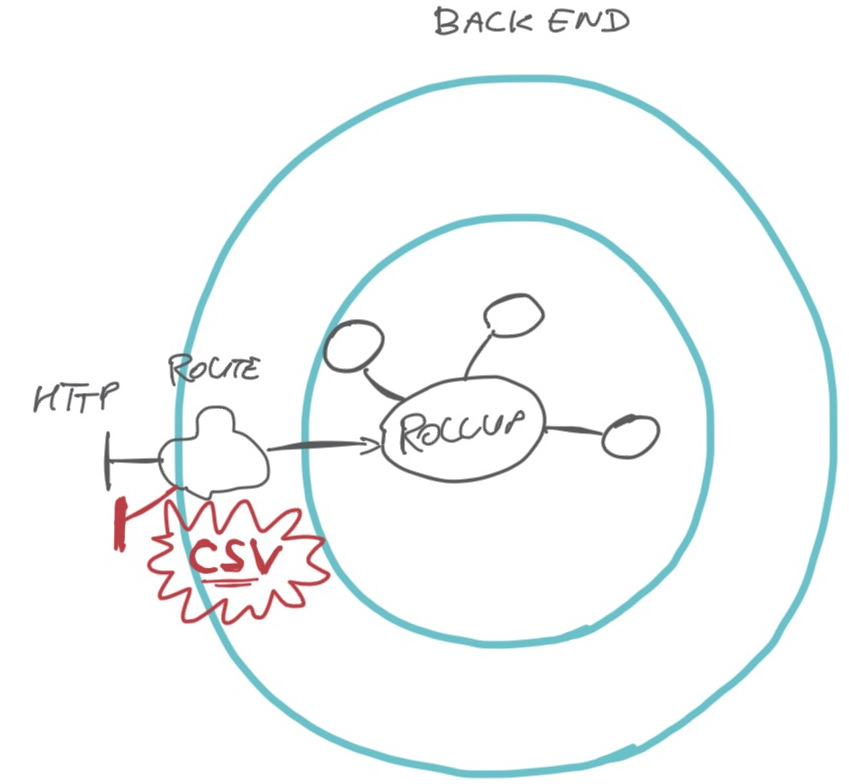 We added an endpoint and a function that maps a Rollup object to text lines in CSV format. A bit of work on the front-end component was required as well, to add a download button.

As a result, whenever we need to change or add data in the CSV we know exactly where to find it: it is an adapter concern, part of our routing code.

The CSV conversion including headings is currently a single function, 8 lines of Python. Maybe someday, we’d like to have more fancy CSV output, and we might find that ‘CSV’ is a thing of itself. In that case we’ll probably extract a class for it.

We wanted to offer the Agile Fluency team survey in different languages, where the facilitator selects a specific language for a diagnostic workshop. The original survey is in English, and our colleague facilitators had been working on German and Spanish translations. Having the team survey available in multiple languages makes the online application much wider applicable.

In our Vue.js front-end, we decided to use the VueI18N library. We created a file with translations and fed this to VueI18N, which plugs itself into UI components. It seemed all pretty straightforward and initially, we thought that language and locale related stuff should be put in the UI components.

The survey contents is not part of the front-end, but comes from the back-end. We extended our back-end with multiple survey translations in YAML format and made the code select the right translation based on the chosen team workshop language.

When creating a diagnostic session, we let the facilitator select a language from a list of languages. The NewDiagnosticSession UI component (which we wrote about in an earlier post) gets the available languages from the back-end.

When the front-end Survey component retrieves a survey, it needs to set its language to the survey language, so that the accompanying instructions show up correctly. Some logic around VueI18N started to grow in the Survey UI component.

Because a facilitator shares the rollup chart view with the team, the rollup chart should also be shown in the correct language. We had to add some conditional logic in a router hook to ensure the current language gets reset when needed.

Hm, it does not smell good…we see more and more knowledge about languages and VueI18N spread around our code base…

Survey language is a cross cutting concern in this application. We cannot isolate it completely. Both front-end and back-end will have knowledge of survey language.
The question is not how to remove this knowledge as much as possible, but rather how to minimize what each part really needs to know to do its job.
In the back-end, we know the language of a diagnostic session and we select an appropriate survey translation. We also select a translation for invitation emails, but there is no other language-based logic.

Reflecting on what we had created, we realised we missed a domain concept and an adapter in the front end. VueI18N is closely related to Vue.js based UI components, but the concept of available languages and a current language is a concern of its own. Hence we introduced a Language Store concept for this, which is implemented by a I18nBasedLanguageStore adapter encapsulating VueI18N dependencies.

Once we had introduced the language store, we suddenly had a place to put all language related stuff: selecting the current language, knowing available languages, resetting the current language. Our domain code can now decide on the language, but it does not need to know how it works out in the UI. The domain code delegates to the Language Store, which handles the details. We have moved the language logic from the UI components to the Language Store.

Once you discover, or uncover, a concept in your code and make it explicit through a type or a class, different concerns start finding their home. Uncovering a concept will make you look in a different way at logic you have been adding in several places.

Things that help in deciding what to put where

Learn what to put where

“How can I learn more about what to put where?” a participant recently asked in our refactoring workshop. There are no best practices or simple lists, it is about skills and design heuristics. So what can you do?

Learning what to put where

We can share our experience with WTPW through workshops, courses and team mentoring.

Learn more about our workshops and courses
Previous Entry Next Entry