Today we’re writing about how simple acts improve feedback loops, which has a compounding effect in development teams over time.

Saruman believes that it is only great power that can hold evil in check. But that is not what I have found. I have found it is the small things. Everyday deeds of ordinary folk that keeps the darkness at bay. Simple acts of kindness and love.
– Gandalf (J.R.R. Tolkien, The Hobbit)

So why then, would we do this?

What does this mean for a developer?

We want to embrace change, without making our lives more difficult in the process.

Putting effort in improving these, like making your unit test suite a few seconds faster, is often hard to explain and justify. It can take some time before you, and especially the people around you start noticing the effects. So it seems like you are focusing on futile things, not on the ‘big’ problems. In the end however, it all adds up. Improvements are multiplicative.

In this way, putting effort in small improvements has a multiplicative, even exponential effect. Doing a tiny bit of improvement everyday can help in breaking away from what Jim Shore calls Stumbling through mediocrity.

There are some interesting things at play here, that might not be obvious initially:

Let’s illustrate this using a diagram of effects.

The impact of improvements might be small, but they do have impact. They reduce developer toil for instance, or reduce technical debt, or make the whole delivery process a bit more smooth. Over time, this helps improve productivity. The time delay is denoted by the || symbol.

Now productivity in development is difficult to get a grip on, like we wrote before in our Under Pressure post. Here we mean “getting more done with the same effort” (or “getting the same done with less effort”).

Higher productivity leads to lower lead time - the time from making a change to having it in production. It will also increase development headroom - which you can spend on features or on more improvements. This is an explicit management decision, which we denote by the black/white square. 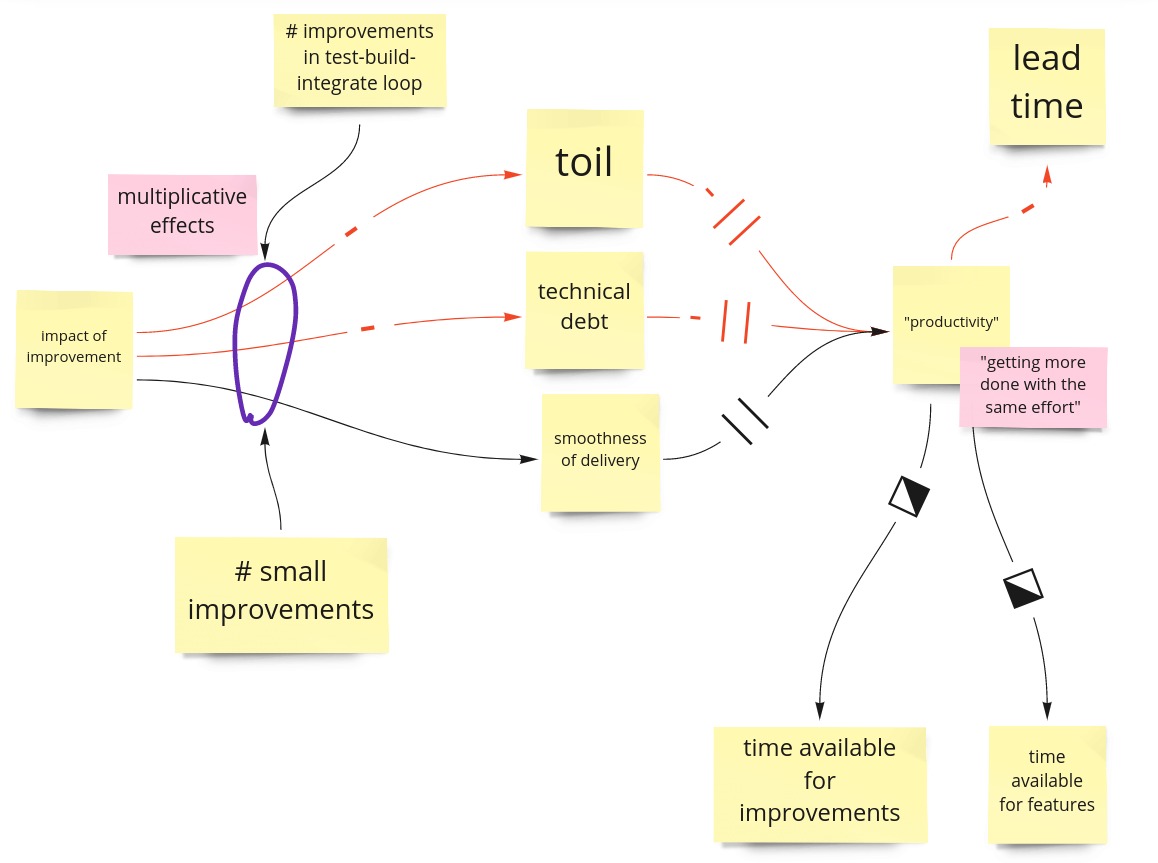 Many small acts of kindness and love, especially in the inner feedback loop of software development, have multiplicative effects: both the number of improvements we do and the fact that the improvements affect processes and actions that we do over and over again, every hour, every day, multiply the impact of improvements. 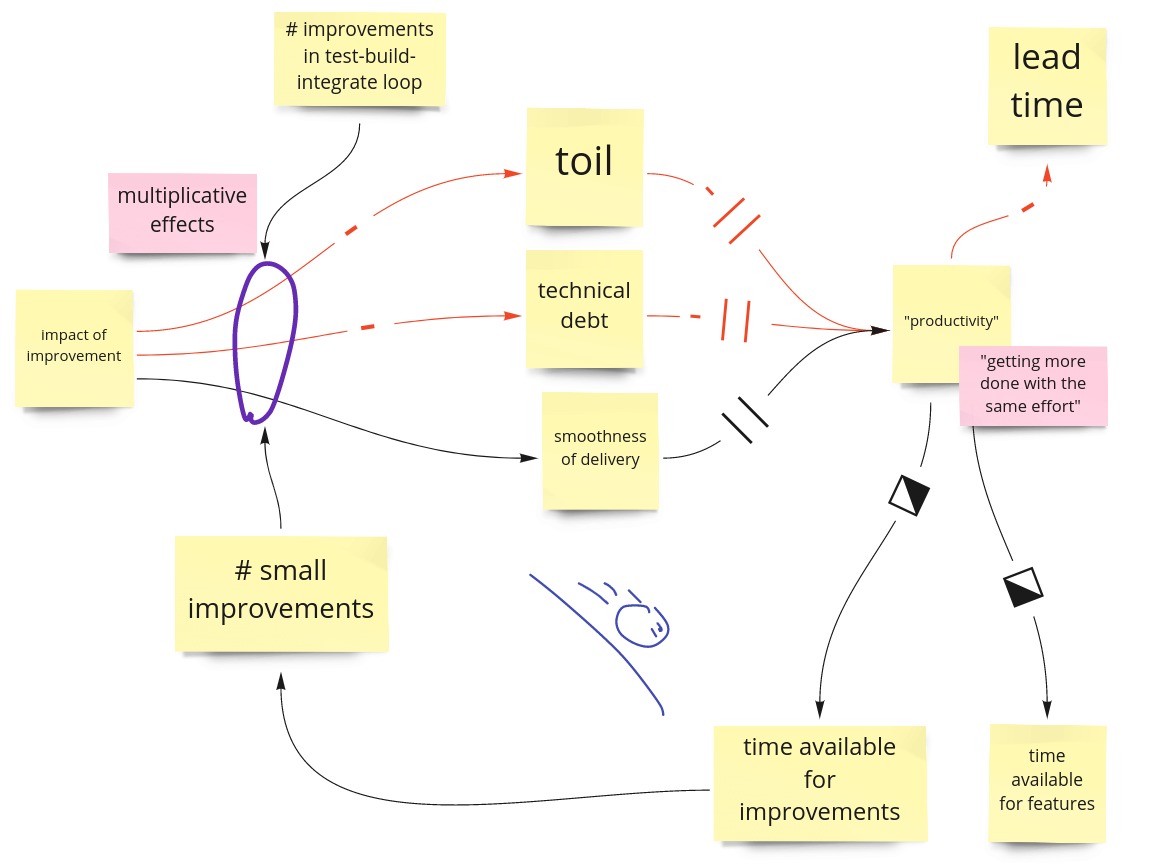 If we decide to focus on features only, we won’t get the increase and we’ll keep on muddling through. Worse, toil and technical debt will accumulate and make us less and less productive.

In practice, we have to make trade-offs between time invested in small improvements and developing features. When we persist in doing a stream of small improvements next to feature work, we will reap the benefits eventually. The delayed payoff can make this a hard sell though.

A team at a client was maintaining multiple legacy systems. They were struggling with productivity, at least in the eyes of their internal customers. Some of the code was twenty years old, and it was quite difficult to make changes in a responsible way. After some tough conversations with management and customers, they started allocating a fixed budget per sprint to work on legacy code and do step by step improvements through refactoring. Initially, this did not show any improvement. In a way they seemed even less productive, because they allocated less time for customer work. After 1-2 years, the improvements started to pay off, making it much easier, faster, cheaper to make new changes.

A team at another client maintained a single legacy system that generated all of the revenue for the client. The client set up a separate team to develop a replacement system from a clean sheet design. Eventually one of us guided the new team in making small improvements - because, productivity and if you do a new thing using the same way of working as before, you’ll get the same outcome. The original team saw this, and started allocating fourty percent of their time to improvements. After half a year, the original team was going so fast, that the company kept the ‘legacy’ product and repurposed the new development for another market.

When we sourced the Gandalf quote, there was a lively discussion on twitter around Ursula Le Guinn’s take on male magicians like Gandalf:

The Gandalf model of wizardly power – the idea, dumbly replicated by J.K. Rowling’s Dumbledore, that asexual male mages hold the world in balance – was never compatible with Le Guin’s deep unease about overt expressions of power.
– as quoted in It’s not Jung, it’s mine

This is what led us to Olivia Butlers’ work around leaders.

Jessica Kerr also uses small acts an antidote against too much efficiency (talking about preventative maintenance):

Do the easy boring job regularly, instead of the hard scary job in a panic.

In this video on Why Your Agile Transformation Failed, Jason Gorman illustrates how the effect of improving the inner (build-test) feedback loop of software gets multiplied.

A Diagram of Effects is a powerful technique to make sense of what is going on in a team or an organization. We learned from Gerald Weinberg and recommend his Quality Software Management series. If you’d like to learn more, or read our whitepaper Promise is Debt (PDF).

Sometimes, we get brought in as the "agile repair shop", arriving after happy, handwaving consultants have abandoned the sinking ship of an agile transformation. Then the organisation invites us to work on some simple acts together, and then experiences effective change. We have some days available for consulting in September and onwards.

Talk to us, the first conversation is free.
Previous Entry Next Entry