Continuous delivery is valuable, but where do you start? At the start of a greenfield development you have no software, and if you had any software, you would not know how to put it into production. 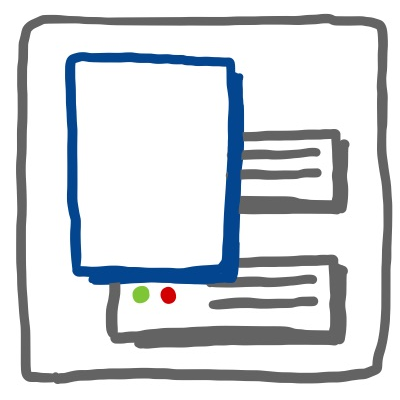 Deploy a blank page to production, so that you know all the steps necessary to deploy the next time. This way you can start iterating on features together with actual users from day one, and speed up the way you deploy with each iteration.

Either you or your organisation are afraid to ship, and you don’t know where to start. On the one hand you have no software to deploy, on the other hand, you don’t know how to deploy it.

When deployment is done by someone else

Even though continuous delivery pipelines are becoming more common, this still happens.

Deployment of websites and applications is outsourced to a different department or company. Deployments happen by handing over a packaged version of the application (e.g. a virtual machine, a .jar file, or a zip file with sources and other assets) together with a document for ops detailing the steps needed to deploy the software.

Releases happen infrequently and are error prone. This often leads to pressure to deploy less frequently. This leads to development teams that are out of sync with delivery - e.g. a team can deliver changes only once a week or once every two weeks.

When you start from scratch

Prefer a technology stack that comes with simple, scripted deployment out of the box, or one that makes deployment extremely straightforward. Create that blank page or the ‘Hello world!’ API and deploy it.

Examples would be Heroku, AWS Amplify, Dokku if you want to self-host many small experiments on the cheap, or Zapier if you need to glue things together.

When you don’t take your own advice

Marc dug this posts out of the drafts folder, as we are cleaning house in our writing. It was originally scheduled for September 2014. I was wondering if this still applied. It does. I started on my second architectural spike for a flashcard app for developers last week. I wrote off the first spike, because deployment would be too much work, due to too many moving parts. It was fun hacking, but three or four docker containers is a lot if you’re spiking on your own, and I was making too many mistakes in development because of it. Deployment would also be several moving parts and some custom scripting. The second walking skeleton was a lot faster, I figured a fair few things to leave out in the domain and the tech to get to a walking skeleton. I chose a glorious little monolith for dirt-road deployment.

I didn’t deploy a blank page to production, but thought once the walking skeleton was done (in slightly under two workdays, so not too much), I’d deploy to a raspberry pi in our home, so that I could defer security until another round, and start testing on multiple devices. When I wanted to do that this morning, I found out that the build tooling I chose doesn’t support the pi’s ARM processor. I could have found that out two days ago. It is not the end of the world, but an unpleasant surprise none the less.

Your team, your stakeholders, operations people, testers and anyone else know what is involved in a release, so there is less fear of doing it again. Everyone can improve something for the next release.

Since you start small - with nothing - you can ship as often as you want. Do the next release quickly after the first one, to get into a rythm, to reduce the risk of errors, and to speed up rollback or recovery in case it is needed.

When you ship a small change, it’s easy to find the ones who know how to handle anything that might go wrong. Errors that are made are likely to be smaller, with less impact.

This is a (proto-)pattern we’ve used in various contexts since at least 2001, when we started doing continuous integration and later continuous delivery. We probably stole this from somewhere else, probably from eXtreme Programming explained 1st edition by Kent Beck, the c2 wiki or the XP mailing list.

Credits: Thanks to Marc Evers for asking if there was value in old drafts, editing and drawing the graphic.

Learning how to get software to production often & early is hard.

Get your software flowing! We have made all the mistakes for you.