My application needs to generate PDF invoices for clients really easily. It should work for different organisational units as well, for example, my business, for my wife’s, who sends out many small invoices, and for some personal business as well.

For now I need something quickly, so that I can generate repeated invoices for a client.

Later, I may want to:

So I thought I’d create a CLI first and keep the option for a web front-end open.

I have used several command argument parsers for multiple personal projects and never bothered to test them. First of all, they were personal projects and no other user would be bothered by glitches in the command line. A second reason is that scripts can be a pain to test: calling a script and capturing the output to see what it is doing is one thing. But what if the script generates (binary) files, makes changes to a database, integrates with APIs and has some business logic as well? Then integrated tests become a pain. Simply calling the script from the command line and observing the effects in several places doesn’t cut it.

In the past 18 months, I have been working for a large organisation where many teams and individuals use Python scripts to automate smaller and bigger tasks. Most of those scripts integrate stuff much like I mentioned above. Typically, the developers have no clue how start testing those scripts, even though the scripts play a crucial role in IT and business processes.

My invoicing app will start as a script, but one with real stuff to do. It needs to deal with tax rules like VAT and potentially others. It will maintain rules around generating invoice numbers, payment periods, and totals. It will make it possible to manage customers and generate invoices with as few user input as possible. It will produce PDF output and needs to deal with multiple organisation units: my business, my wife’s business, and some personal things.

I decided to apply Hexagonal Architecture or Ports and Adapters architecture to structure the script code. The picture below shows the architecture of the script: we have a CLI adapter dealing with the command line stuff, a repository adapter for storing customers and invoices, and a PDF adapter for generating PDFs. The domain logic and business rules (including invoicing logic and tax rules) are in the centre. 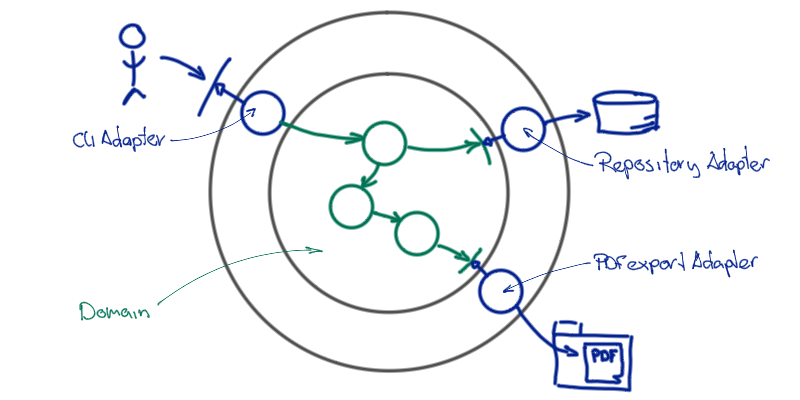 Testing business rules focuses on the domain, testing the adapter integration with storage of invoices and customers (whatever that storage is, we haven’t decided yet) is a separate issue.

Testing the command line interface should be just like testing a REST interface. It is an adapter concern that we can test drive, separate from the business logic.

Click is an easy to use Python based argument parser, once you understand its model. It supports nested groups of commands and arguments, and options for each of the levels. For example:

This would make it possible to parse:

The decorators command and group accept arguments to specify options and parameters for the groups and commands, so that it is easy to enable your script to parse:

It even has a CliRunner() for testing, to enable you to invoke a command like this:

As a first step, I want to list the customers, so that I can select one to send an invoice to. In the Ports and Adapters perspective, it looks like: 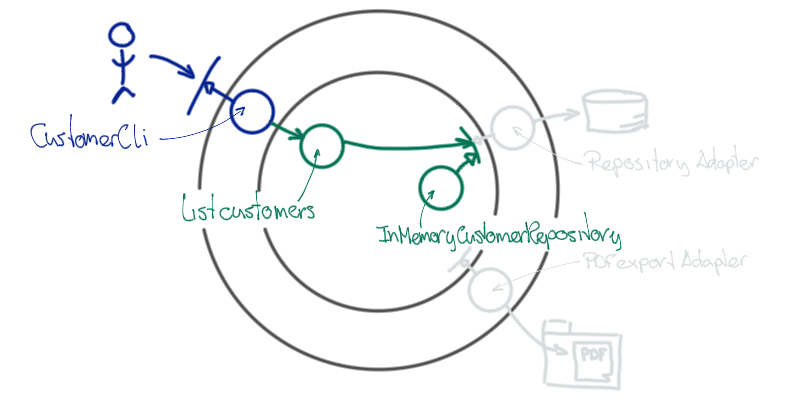 The CustomerCli delegates the list action to the ListCustomers query, which in turn gets the customers from the repository. Note that we have drawn the InMemoryCustomerRepository in the domain here. We are not very consistent in where we put such an in-memory repository. Sometimes we regard it as an adapter, for instance when it is replacing a real database adapter as a fake. On the other hand it doesn’t adapt anything. It is a thing on its own, with no relation to the outside world. This all a matter of perspective and intent.

Overdesign? You may argue that, in this case, the query object is a bit overkill. Why not let the command line interface get the customers from the repository directly? In this case, we could do that; we merely want to make clear how it would look like if the query object would a bit more complicated.

I chose to group the test cases in classes and have multiple groups of tests in a file, because it helps the readability of the test suite.

After getting the failure:

Adding code step by step, the implementation looks similar to the click example above:

The problem with this approach

The test works and it is good enough to get acquainted with click, but I am not happy with the situation. What I have specified is that whatever happens, listing customers produces “QWAN Quality Without A Name”. Somehow I need to be able to influence the result:

To do that, we need to be able to influence the result whatever the list function is interacting with.

The issue with most easy-to-use libraries like click (or flask for HTTP interfaces), is that the typical examples you find online use top level functions. Even though they have testing support, they seem to focus on integrated testing only. They do not describe how you can inject the library as a dependency.

Before moving on, I remove the list() implementation to prevent false positives:

We like to be in control of our dependencies. Dependency injection should not be some magic process. So in the Given-When-Then example above, my test should look like:

To make the test complete, I need something the code below. I introduce a CustomerCli class and inject a stub for the customer query. The stub returns a list with one customer.

aValidCustomer is our pyhtonic variation of the builder pattern that we often use for creating instances of complicated object structures in tests. Customer is a tree structure and has a bunch of attributes. aValidCustomer creates an example customer instance and allows us to focus on the attributes that are relevant for the test.

Running the test above results in:

So step by step I define the customer CLI:

I’m not sure if click would actually work with instance methods. To try this out, I change the customers and list functions into methods in CustomerCli:

This gives the same failure, but is it actually calling list? Let’s try the cheat-implementation again.

Nope it does not, still the same failure. Apparently, click only works with plain functions. I recall a trick that I used for Flask routes. I created a register method in the route classes and used inner functions.

I move the customers and list methods to inner functions of a register method that takes the invoicer_app function as an argument. In Python, this is quite a small step. Its a bit of indenting and removing self parameters:

Now let’s replace the cheat-implementation with something real:

This works, but only for one customer. I need to add a test for multiple customers. As a small refactoring, I rename the current test to test_list_customers_formats_a_customers_short_hand_and_name. The new test looks like:

There’s some duplication in the tests, so I clean them up a bit:

Still not happy with the invoke noise that repeats itself in both tests, I extract this in a new method. This method may eventually be pulled up in a superclass, but let’s not get ahead of myself.

Testing End-to-End through the command line

In our test architecture post, we elaborated on choosing end-to-end-ness of tests. With my current CLI test setup, I made it possible to choose end-to-end-ness and still manage the context of my end to end test with ease. The current test setup allows me to create a setup with in-memory repositories for customers, invoices, etc.

Then, if I choose end-to-end-ness for my test as covering the whole script with an in-memory repository, the resulting end to end test looks like this:

The distinction between the CLI adapter integration test and the end to end test is small in this example, because the query example itself is extremely simple. But you’ll get the idea:

Test driving a Command Line Interface is definitely doable. It needs a bit of a testing mindset, some creativity, and looking for libraries that help you just enough. I created a basis for test driving my command line interface, which allowing me to develop my application in a sustainable way.

Credits: Marc and Willem, Thanks again for raking this post while I am making a mess.

Want to apply unit testing or test driven development where it seems hard or impossible?

We offer workshops on Test Driven Development in legacy code and we can mentor your team in applying it successfully in your own environment.

Learn more about our workshops
Previous Entry Next Entry