Last week Rob, Marc and I went to Software Circus, a new conference on programmable infrastructure.

Here’s a brief summary of the sessions I particularly enjoyed. Photos don’t seem to be up yet, but this one sums up at least part of my experience: great coffee and fresh mint tea, sunshine and a beach at a canal in Amsterdam (the beach, unfortunately is just off to the right of the picture). 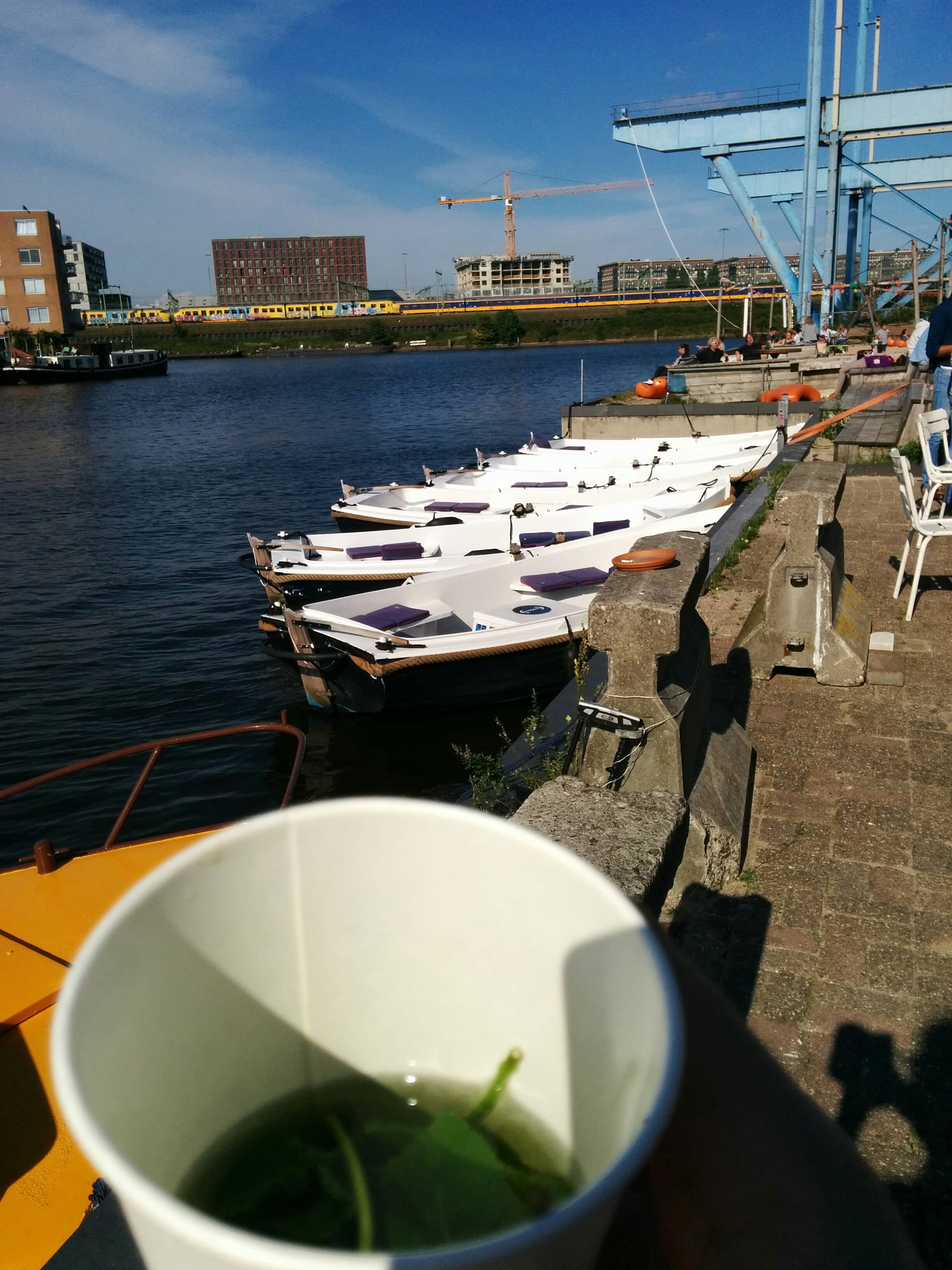 And some interesting sessions, in chronological order.

Prometheues - metrics that scale down and up

I’ve used or tried to use several metrics solutions, most of them seem fine if you scale up (i.e. you can have someone maintain them), and most were not very easy to set up (Riemann, Statsd / Graphite). Probably because of many moving parts. E.g. storing your data is separate from showing it, which is separate from collecting it. That is great once you know what you’re doing, but for getting started, not so much.

Robert Jacob ran a workshop on wednesday introducing Prometheus. That (wonder!) worked out of the box, I had it set up monitoring my freshly baked haskell web service in an hour or so. Prometheus has support for efficiently pushing data from a server or service when there is a lot of it, but also supports getting started by just publishing a simple web page on ‘/metrics’ with some text explaining the metrics provided. There are a number of exporters, e.g. for getting statistics from nginx or a host machine.

If you want to have a look, this prometheus review looks like a reasonable introduction.

No slides, no process, no projects, no premises.

Adrian Cockroft was gutsy enough to deliver an off the cuff speech, mostly based on audience questions. This gave us some insights on how Netflix designed work and systems to support a particular culture. Not exactly sure what to do with it yet.

How to automate your infrastructure

Arnoud Vermeer gave some brutally honest insights in what goes on in running, and trying to automate, dispersed data centres with a varied infrastructure. Not directly appliccable to what we do on a day-to-day basis, but interesting to see what goes in the kind of infrastructure that all of us use on a daily basis.

Some takeaways from this:

Anil Madhavapeddy gave an introduction to unikernels that was both hands-on and mindblowing. This talk had a very high information density. At least for me, I had vaguely heard about unikernels before, this made it a lot more concrete.

Unikernels allow you to build tiny virtual machines that only contain the minimal kernel and OS support that an application needs. This means you can e.g. build a VM in just 24MB, I don’t expect to find a linux distribution of that size. If your service doesn’t require a file system, let it use a kernel without file system support, and an OS without the ‘ls’ command etc.

The second half of the talk showed a distributed storage layer based on git (the storage format, not necessarily the tooling because of performance). The example was a distributed log that could be merged back to a single git repository, e.g. on a developers’ laptop.

The more I use unix, the more I appreciate its’ tools and how they fit together. Unix allows you to treat the internet (or github) as a giant scrapheap, and assemble solutions made from what ever programming language the developers who made the tool feel like. Think about it: Command-line tools can be 235x faster than your Hadoop cluster.

Steve Freeman ranted enthusiastically about how they built a system to index and filter a large set of PDF documents from unix pipes and filters instead of e.g. hadoop, and how the resulting solution was much smaller and simpler than what they had planned initially.

I find that Docker encourages command line tools even more. If you want to use your favorite programming language or tool, you have to make the conscious decision to include it in a Dockerfile. Using bash, cut, jq or make is then a lot easier, because those are often already present, and don’t require a separate dependency management solution (looking at you, Python and Ruby).

Steve also made the argument, that a lot of unix tools were written at a time when computers had significantly fewer resources, and are therefore much more highly optimized than e.g. hadoop.

Sometimes I think spinning up virtual machines is just too easy these days. If money isn’t an object, at least take into consideration the amount of power and water (for cooling) data centres consume. Then look at xargs and friends, and consider how satisfying it can be to get a result quickly.

Not a session per se, but deserves a mention. Catering for 200+ people is not easy, and my expectations for food at conferences is sufficiently low. I was pleasantly surprised. The food was very good, the meat not scorched, and Roest, which means Rust in English, provided very nice nibbles between the main meals. Food for thought.

Inspiring the Next Generation to Runaway and join the circus

I thoroughly enjoyed Diane Mueller ‘s talk on encouraging more people of all ages to tinker with technology. This includes, but is not limited to, programming.

I saw some chatter about if kids need role models to start programming. I didn’t have any, and I don’t know many of my colleagues who did. Diane suggested a few things. The one that stuck with me most: provide a magical experience. The idea that you can understand, and modify, how everyday devices work is foreign to many people. Often to me it is as well, although I’m tempted to build a better rat trap.

Making a caravan as a maker space was another interesting one, as going into a makerspace can be daunting for a first time. They combine it with arts and crafts caravans to form… a circus!

Have a look at Get Makered to get an impression of their setup.

From Theory to Production: Managing Applications at Scale

Kelsey Hightower mixed a hands-on demonstration of Kubernetes with rounds of tetris to show the effects of naive resource management in clusters. This talk managed to get across what I didn’t understand from other sources - in what circumstances distributed configuration management, service discovery and application scheduling makes sense. The demo clearly showed how it works in practice.

Florian Sellmayr demonstrated LambdaCD a Continuous Integration solution build with and configured (i.e. programmed) through Clojure. I liked how a build pipeline can be succinctly expressed in code.

What I’m not convinced about, is that the CI server now becomes another stack to manage. Getting started looks innocent enough “just start Leiningen and it will take care of the rest”, but over time you’ll need to update Leiningen on your CI server(s), make sure the right versions of everything are present etc. And whenever you make a modification, the build server has to restart. I found reloading in Clojure to not be very reliable. Yes, it works a few times, and then either fails for mysterious reasons or you find yourself calling a function that is deleted in source, but of course still present in the VM.

And if the shiny new function you just wrote breaks, it breaks CI for everyone. So maybe the CI should be CI’d? Meta Meta.

The other thing I found in production, is that source code can be a good deal less discoverable than a UI. After some experience with Bake, in Haskell, I found that it always took us some time to understand what it is we wanted to do, even with things I can do with Jenkins (which has its own problems, but at least a UI and plugins to browse through) in a heartbeat.

With Bake I found myself deploying a ‘beta’ CI in a blank VM. Which was easy enough to do, but doesn’t feel very fluid.

Sometimes I think CI is not nearly as simple as it could be. Hilverd Reker and Steve Freeman described their meta-pipeline for generating continuous delivery pipelines for microservices. Having ‘just’ 4 people maintaining a CD system for a hundred developers is not that much, but still, a whole team just to be able to build software continuously. I don’t have answers here, but it does make me wonder.

So there you have it. Software Circus. New answers, new questions. Not too shabby for a conference that was put together in a few summer months. Thanks Jamie, Mark and everybody else for making it quite enjoyable!